The only bad luck in this photo is that snow.

With all of the health battles I’ve had the past couple months, I literally haven’t taken any new squirrel photos at all since my last trip to the park in mid May (something I plan to fix this coming week when I hopefully have five healthy days off work).  That had me digging through the archives, and I happened upon a batch of pictures I took in mid January 2014 that contained a few images of some of the other critters who happened to be romping through my backyard on a winter’s day.  Here’s the back of a black cat making tracks through the snow.  I guess he didn’t want to turn around so I could get a better shot of his pretty face….

But this cardinal was more than willing to show off his beauty…. 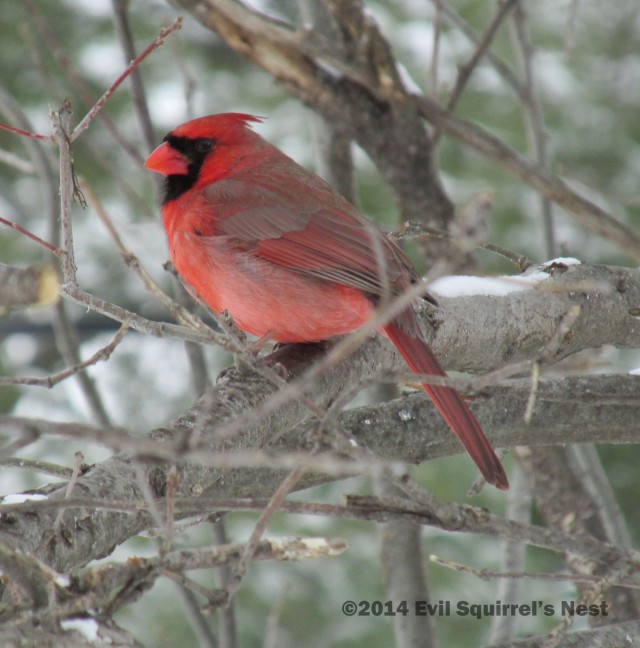 Is it almost spring training yet?

I get the occasional bird shot while I’m photographing the squirrels, and this is probably one of the more colorful featherbrains you’ll find in my archive!

OK, I guess we can’t have a Saturday Squirrel post without at least one squirrel.  So here’s another photo from that same batch…

Hey, are you gonna finish that seed, pal?

The look on the squirrel’s face at the little beggar is priceless!

Bored former 30-something who has nothing better to do with his life than draw cartoon squirrels.
View all posts by evilsquirrel13 →
This entry was posted in Saturday Squirrel and tagged adorable, bird, black cat, cardinal, cat, cute, photo, photography, snow, squirrel. Bookmark the permalink.

26 Responses to Saturday Not Squirrels