Awwww, this will be such a sweet SCT profile today!

The Nest is turning to the big guns for this week’s SYW intro, and spotlighting everyone’s favorite back door squirrel, Big Scrat!  Perhaps no SCT celebrity turned a one-time gag into their big break more than Big Scrat did when I dedicated an episode four years ago to sending Snuggle to jail where he met his new “best friend with benefits.”  Big Scrat has returned time and time again to torment Uncle Snuggie (and occasionally some other hapless victim) with his warm and passionate jailhouse love.

If not for a chance observation and probably a lot of luck, there would be no Big Scrat to enrich your SCT viewing experience with serial sodomy.  Almost ten years ago, he was residing in the claw machine in the arcade at the Mecca I work at… and I invested a whole dollar on two chances to pull him out, which wound up being all I needed.

I obviously have to be careful with crafting an SCT question around Big Scrat’s behavior, which would likely not be tolerated on 99.999999% of all other blogs.  But I got that covered…

Who or what do you feel is lurking right behind you, just waiting to ambush you and make your life a living hell (or “heck” for those with delicate sensibilities)? 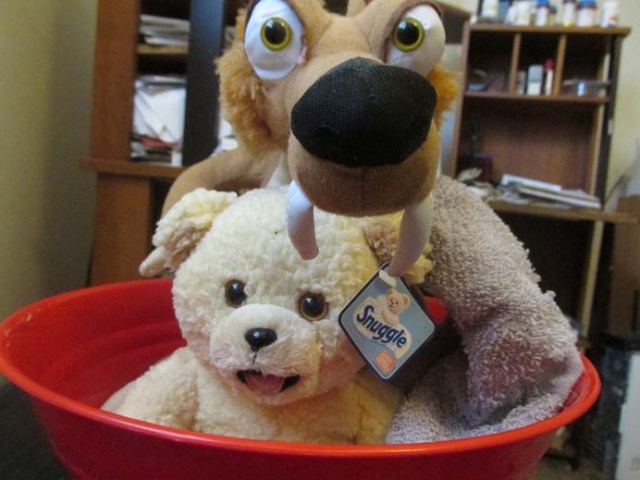 Do I really have to answer this!?!?

And now that the coast is clear, it’s time to share our world with Melanie’s questions for this week!  She said two of them were seasonal themed, but none of them seem to be about Christmas to me…. 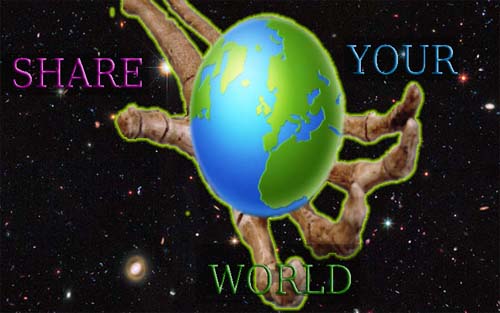 What is the scariest game (board or on-line) you ever may have played?

After some thought, I’m going to answer this straight up and submit a game called Mountain King that was released for the old (as in FORTY years old) Atari video game system.  Way back in the day when I had a best friend, he had an old Atari system and during one of my frequent sleepovers, we played this game one night for a long time trying to beat the stupid thing.  The combination of the music which will fade in and out depending on how close you are to the hidden item you have to find with your flashlight and the dark, archaic graphics which will suddenly change at different stages of the game are more than a bit unsettling.  Especially in the middle of the night…

What’s just ‘over the rainbow” for you?

Let me ask an expert…

RAINBOW DONKEY: What’s just over the rainbow to me?  Well, that would be the lady I adore the most, of course.

SPARKLEPONY: Well isn’t that just touching.  That almost makes up for you not buying me that diamond brooch for Valentine’s Day.  But at least I know my hubby can be sweet sometimes….

MITZI: YAYAYAYAYAY!!!!  Like, Mitzi’s totally over the rainbow for her studly wudly stallion!!!  Does this mean Mitzi can totally be on top now!

SPARKLEPONY: I doubt there are any rainbows in the outhouse, which is where you’ll be sleeping from now on, mister!!!!

Do you have to watch something upbeat after watching a suspense or horror movie so you can go to sleep?

If I watched suspense of especially horror movies, I wouldn’t be doing it right before going to sleep.  But since I usually sleep during the day, it wouldn’t be quite as scary… 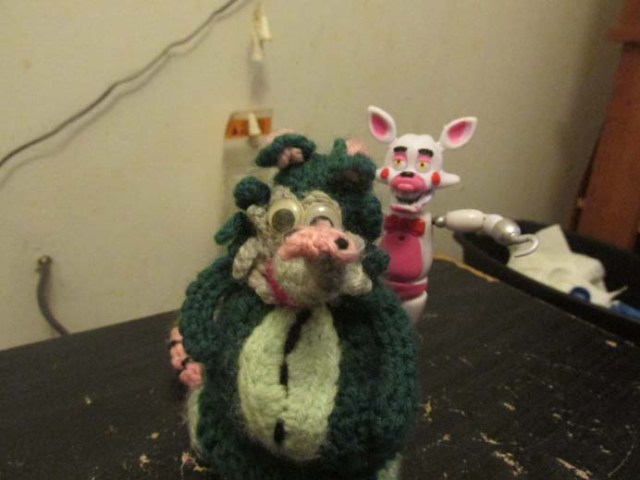 I don’t have “daymares,” unlike Buster…

Is there intent behind every action?

Another question for the expert!

TROLL: That was really inspiring!  You’ve pumped me up to become a better troll!

MITZI: Like, OMG!  You’re mind is so dirty, Foxy Woxy!  Mitzi needs to totally punish you!

FUZZYWIG: Dude, you’re cramping my mellow.  Can you pipe down until after 4:20?

RAINY: How offensive!  How can you possibly think such hateful things, you horrible fox!

SHADOW: Well done, Mr. Fox.  The intent of your action has just been interpreted in multiple ways by these casual observers.  You are either an amazing sorcerer, or this is just another example of how pathetic human nature is….

Feel free to share some gratitude with folks today!

Judge for yourself my intent in creating this comic…

Bored former 30-something who has nothing better to do with his life than draw cartoon squirrels.
View all posts by evilsquirrel13 →
This entry was posted in Share Your World and tagged answers, big scrat, intent, mountain king, questions, Share Your World. Bookmark the permalink.