Another ad on Mecca Radio that I hear several times a night has caught my ear in a couple of head slapping ways.  It’s for our protection policy that can be purchased with any new phone, and the commercial starts with a few holiday themed scenarios where one may “accidentally” damage their smartphone when they shouldn’t have it out in the first place….. like (I am NOT making this up) while having a snowball fight!

I can’t imagine this was an issue back in Rockwell’s day.

While there’s nothing morally wrong with Mecca taking advantage of criminally stupid people, as a smartphone hater, it irritates me that such a problem exists to even have ads like that in the first place.  But even more WTF inducing is the line it ends on…

“Protect it today
Enjoy it for years!”

Given that cellphones in this day and age are already ticking time bombs of obsolescence from the very moment they’re activated…. who exactly is going to “enjoy” their smartphone “for years” even if it doesn’t get pelted by your bratty cousin with a snowball?

Maybe I do! Trading up is so overrated!

While going through the answers other Share Your World players gave to my questions this past week, I really enjoyed the one Julz provided to the alternative snack for Santa query.  She said her family never put milk out for Santa, but rather a beer or glass of Scotch instead!  This cracked me up because it’s just the kind of oddball thing my family would have done if it weren’t for the fact that my parents rarely drank alcohol (or that my Dad usually had to work that night anyway)…

And it made me wish I’d asked for any offbeat holiday traditions in the family as Santa’s question instead!  I certainly had one I could relate… and those who’ve followed my blog for a while probably already know what it is, as it used be (and kinda still is) a running gag here.

My Mom never bought gift boxes.  If something couldn’t be just wrapped, it got put into some other empty box in the house and that was wrapped.  The boxes my Dad’s syringes came in (he was diabetic) were a frequently used impromptu gift box.  But with five females in the house, there was another box that got emptied a lot, and it was a virtual lock somebody was getting a gift inside of one each and every Christmas morning…

Take care not to get toxic shock syndrome from your gift!

So for those not in the know, whenever you see me joke about putting things in tampon boxes on my blog, now you’ll know you can thank my Mom’s wacky holiday tradition for that reference!

Friday was the first walk I got in since Thanksgiving (and I was very thankful for the days off where it was in the low 70’s each day!), and I made sure to bring my camera along because I was curious if this guy….

Had gotten a makeover yet. 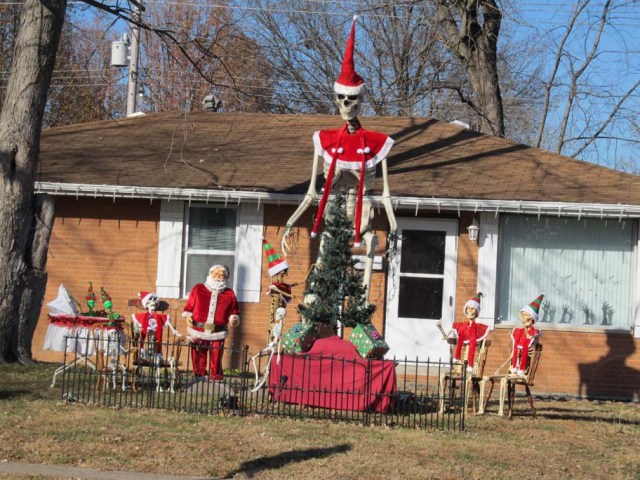 Santa could use more milk and cookies… and scotch.