An Eye For An Eye

CHIP: Has Evil Squirrel still not fixed your loose eye!?!?

BUSTER: Oh, he apparently ordered the new parts from Canada, so I’m on a six year waiting list…

CHIP: That’s not right, Buster!  That should have been dealt with immediately!  Nothing is more important than your eyesight!

CHIP: I’ll have that fixed up in a jiffy!  I just need to find some glue…. 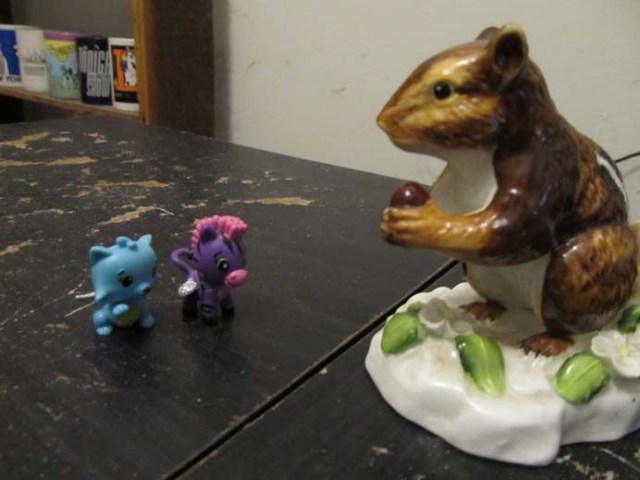 CHIP: Perfect!  A couple of schoolgirls!

ZEEBA: Back off, creep!  Wanna know what happened to the last perv that brought me to their windowless van? (Holds up a Vienna sausage)

CHIP: I’m not a perv!  I just need to borrow some glue, and I figured you girls might have some as a school supply.

BEARCAT: Sure thing, dude!  I know my sis has some (Digs in Zeeba’s Charles Manson backpack)…. here you go!

BEARCAT: Didn’t Mommy just buy that for you last week, Zeeba?  What happened to it all?

ZEEBA: Miss Twilight pitched a fit when I dissected my lab partner in science class, so I had to glue her ass back together!

BEARCAT: Zeeba!!!!  Is that why Caper had to go see the nurse yesterday?

ZEEBA: No one cares about that bitch!

CHIP: OK, this is a tad disturbing…. 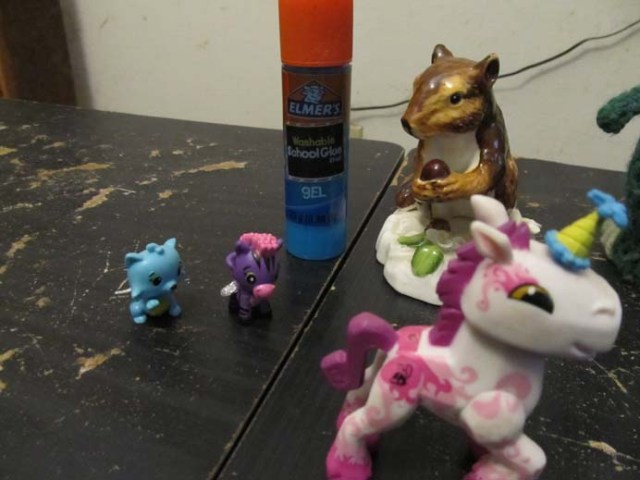 BEARCAT: Zeeba, what are you…..

ZEEBA: This is the good shit, too!  Zeeba knows how to turn blood into glue!

CHIP: I’m just going to pretend that none of this happened…… thank you, girls.

BUSTER: Did you find some glue?

FUZZYWIG: Hey man, my “supply” ran out for the week and I really need to get my high on…

CHIP: Put the cap back on that glue before it dries out! 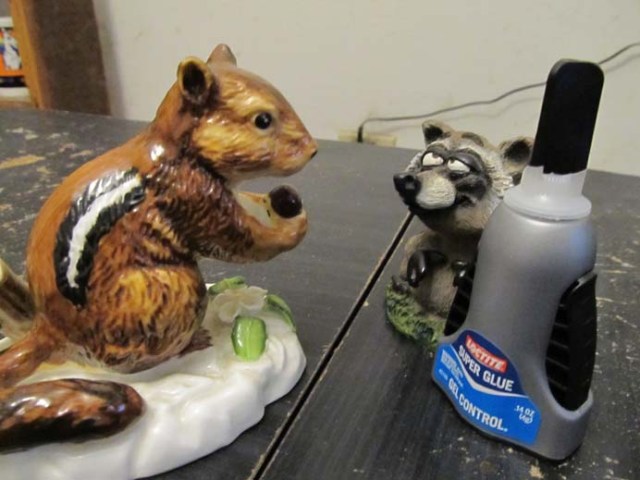 FUZZYWIG: A lot of fun you are, Glue Nazi!

CHIP: I need that to reattach Buster’s eye!

FUZZYWIG: You can’t use this then!

CHIP: Why not?  Don’t you think it will bind to Buster’s skin?

FUZZYWIG: No, it says right here on the label, “KEEP OUT OF EYES!”

CHIP: Very funny.  Now it’s time for me to give Buster his vision back…

BUSTER: I’m afraid I have no idea, my peripheral vision is bad on that side for some reason.

CHIP: Well, maybe it just fell off and rolled off somewhere….

FUZZYWIG: Or maybe that critter knows what happened to it…. 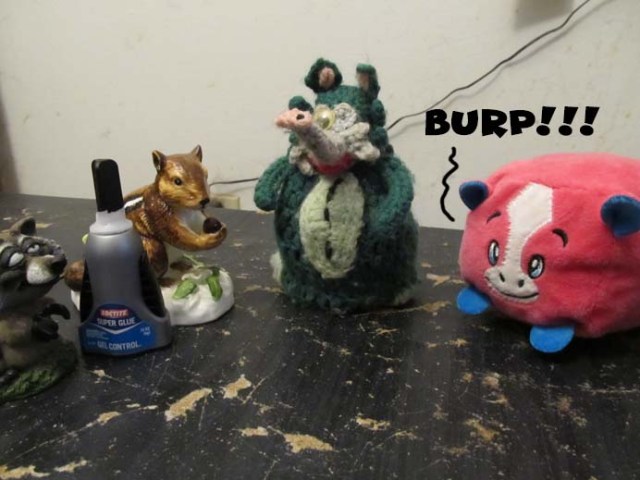 MOOFOO: I’m afraid I did.  Old habits and all….

FUZZYWIG: Hey, I thought we named you Biggie.

MOOFOO: Yeah, but after Mandy won the Contest of Whatever, I legally changed my name to Moofoo.  It looks so much cooler when I sign autographs for my fans!

CHIP: That was Buster’s eye you just ate!  We need it back!!!

CHIP: Mitzi!  You can’t be any help to us right now!

FUZZYWIG: She’s being a great help to me by wearing that low cut shirt.

MITZI: Mitzi, like, heard that you need someone to poopoo right now, so Mitzi totally brought along her bottle of Magnesium Cyclops!

CHIP: That’s magnesium citrate, Mitzi…. and what in the hell would you have a bottle of that for?

MITZI: Mitzi, like, totally needs to keep her poopchute clean for……. well, those scenes Mitzi gets paid totally extra for in her film career!!! 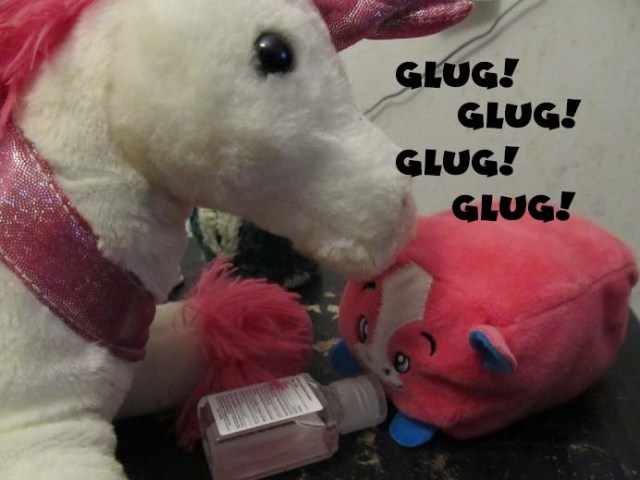 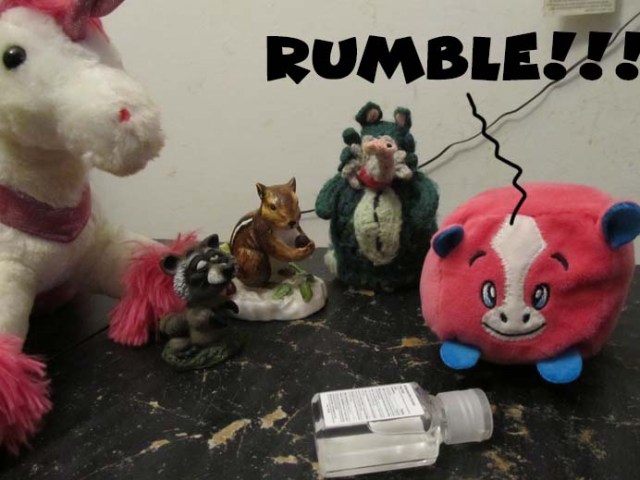 FUZZYWIG: Better go off camera then.  I think the children watching this have been traumatized enough.

CHIP: I think the ADULTS watching this have been traumatized enough!  So now what do we do while we wait for Buster’s eye to pass?

FUZZYWIG: Hey Buster!  I got a seeing eye mutt for you.

BUSTER: (Grabbing the leash) Cool!  Does he do tricks?

FUZZYWIG: I’ll even let you keep him after you get your sight back.  He can guard your trash can from nasty thieving raccoons.

CHIP: Aren’t you a raccoon, Fuzzy? 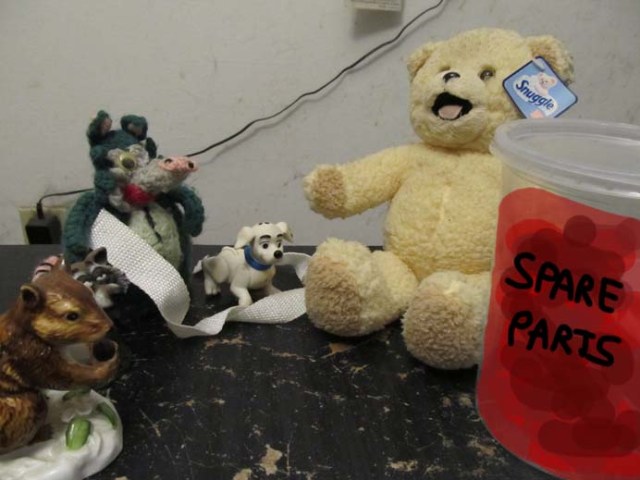 SNUGGLE: Wassup?  I just happened to be in the neighborhood, and was wondering if any of you might be interested in some black market body parts?

BUSTER: Oh, I could really use a new spleen!

CHIP: That’s disgusting!  Where did you even get those…… parts from?

FUZZYWIG: I think I saw those on Hung Lo’s buffet last week next to the stir fried mutt.

SNUGGLE: Hey, I’m the chef there and Hung Lo lets me keep whatever critter parts don’t go into the wok!  Waste not, want not!

FUZZYWIG: Got a spare eyeball, by chance?

SNUGGLE: Hmmmmmm, lemme see….. (starts digging through his parts jar with his bare hands) no, that’s a colon.  Um…. hey, I think that’s a severed dragon wang!  Better hold on to that….. ah, here we go!!! 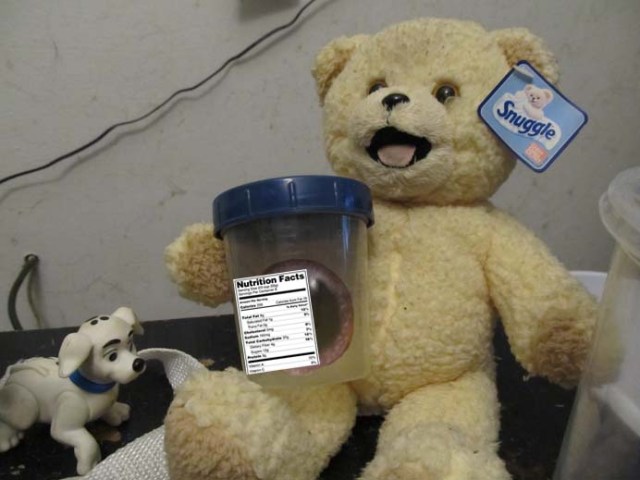 SNUGGLE: One used eyeball!  The previous owner was a little old lady who only drove around the block to the strip club every Sunday…

SNUGGLE: I’ll just go ahead and take care of the installation for your friend…

FUZZYWIG: Reminds me of when we’d play Operation on my sister’s cat.

SNUGGLE: There you go, good as new!

BUSTER: Whoa!  I think I can see into the fifth dimension with this thing!

CHIP: Snuggle, that eye is WAY too big for Buster’s head!  Besides, that eye looks awfully familiar…..

SNUGGLE: Dude!  I swear, I don’t know where it came from….

CHIP: Snuggle, give Mr. Fox his eye back before he banishes us all out to the cornfield again!

SNUGGLE: Dude!  This volunteer’s got a valid organ donor card!  And I don’t think anyone would dispute he isn’t brain dead!

SNUGGLE: Eh, whatever!  (Repossesses Buster’s new eye) I’ll still be billing Buster’s insurance company for this.  I guess I’ll unload my goods on the Mecca deli…

MOOFOO: Um, excuse me, but I just had a bowel movement. 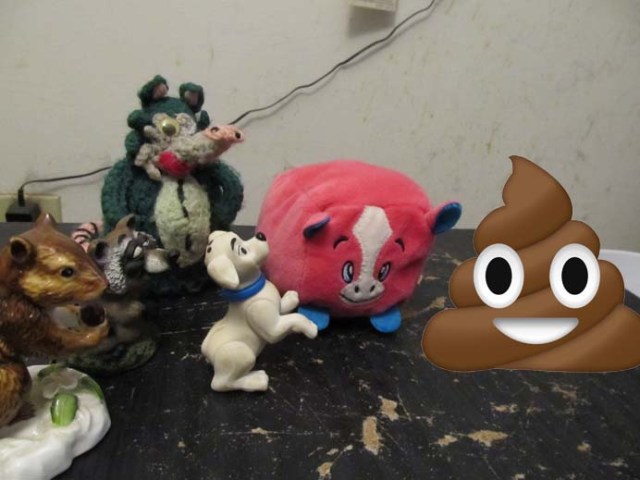 CHIP: That looks like six weeks worth of poop!  How are we going to find Buster’s eye in that mess?

FUZZYWIG: Hey Troll!  A little birdie told me that there’s a dollar buried somewhere in that giant pile of shit over there….

TROLL: A dollar!?!?!  Fuck yeah!  I already spent all my unemployment check on booze and ciggies this month!  Time to go make a buck!!!

Troll dives headfirst into the giant pile of excrement….

CHIP: I can’t look at this either!

TROLL: I sure didn’t find no dollar in that giant cowpie!  But I did find this eyeball….

TROLL: And it wasn’t a total loss!  I found this watch that Jimmy Hoffa was last seen wearing…. I’ll bet it gets me at least a ten-spot at the pawn shop!

Chip uses an entire stash of napkins The Nest stole from Burger King to clean off Buster’s eye….

Gory surgical scenes removed for the benefit of the squeamish….

CHIP: There we go!  Buster’s eye is back in place!

FUZZYWIG: And the patient lived…… amazingly.

BUSTER: Wow, this is awesome! 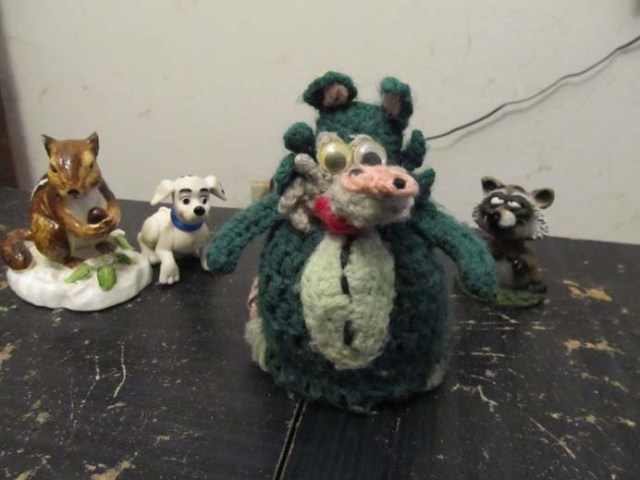 BUSTER: I have my full vision back!!!  After all those months of squinting to see the license plates of the cars that ran me over!  I’ll never take my sight for granted again!  I’ve never felt this alive before!!! 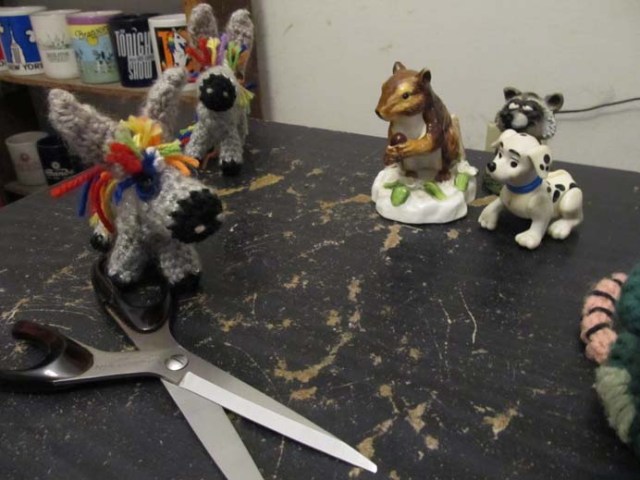 SPONKIE 2: Brother, what did Mommy always tell you about running with scissors?

SPONKIE 2: Now have you learned your lesson?

SPONKIE 1: Yeah sis, that was dumb of me!  Come on, let’s go get some oatmeal flavored ice cream!

BUSTER: Well, it looks like I’m no better off than I was before!  At least the scissors didn’t pierce my brain, I think!

CHIP: After all that trouble we went through to fix Buster’s eye, this happens!  I guess there’s only one thing to do now…..

FUZZYWIG: Wow, Chip!  I didn’t think you had it in you to put a possum out of its misery.

CHIP: Fuck the possum!  I’m just putting this episode out of its misery!!!

11 Responses to An Eye For An Eye