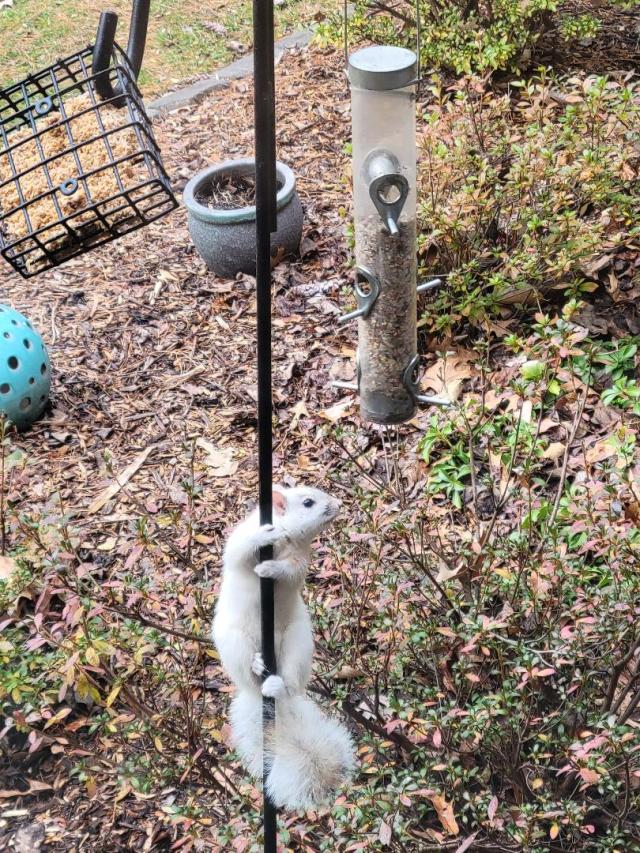 It’s a long way to the top…

I got a very special Christmas surprise in my Yahoo mailbox this week from a lady I’ve known for a while over at my other internet home named Nancy.  Namely, these four

absolutely precious photos of a white squirrel who has taken up residence in her yard in Virginia!  She was kind enough to allow me to share them with my fellow squirrel lovers, and I thought this little angel would be the prefect way to end The Nest to send out 2022 with a bang!

White furred squirrels are the result of an uncommon mutation in normal grey squirrels, and is actually possible in pretty much any animal in the kingdom.  Leucism is a condition where an animal loses, or is born without part of its normal pigmentation.  In squirrels, it can create “squnks” (Piebaldism, which was the subject of this VERY OLD post of mine) and these snowy white cuties if most of their fur loses pigmentation.

Waiting patiently for Tails From The Ranch to remind us that no squirrel is an angel….

Note that the squirrel does not have red eyes, has some color in its face, and even has a somewhat normal stripe in its tail.  He is not an albino, a condition which seems more well known, but much rarer than leucism.  He is still, however, in much greater peril than his normally colored contemporaries given that his bright white coat not only provides little camouflage from predators, but makes him stick out like a sore thumb…

I’m pretty hard to find in the snow, though!

I’ve never come across any squirrel lighter than a blonde, so I thank Nancy for allowing me to share some pics of her resident white squirrel…. who is certainly one of the most special Saturday Squirrels I’ve ever gotten to feature!

Have a great weekend and new year everyone!

Bored former 30-something who has nothing better to do with his life than draw cartoon squirrels.
View all posts by evilsquirrel13 →
This entry was posted in Saturday Squirrel and tagged adorable, angel, cute, leucism, photo, photography, squirrel, white, white squirrel. Bookmark the permalink.

12 Responses to A Perfect Angel