In the narration of what was probably my favorite recurring Christmas special of my youth “Santa Claus Is Coming To Town”, Fred Astaire proclaimed Christmas Eve to be the holiest night of the year.  It’s a good bet that had nothing to do with the fact that Christmas Eve marks the anniversary of Evil Squirrel’s Nest’s debut in the land of WordPress, but I still got special permission from Burgermeister Meisterburger to raise all holy hell today in celebrating.

Round up ze mangy rodents and throw zem all in jail, you Johnny Depp reject!

Looking back at my very first post on this blog, it’s funny to think of what my intentions were 12 months ago and how it’s morphed into what The Nest has become now.  Obviously, I am no longer overly concerned about hawking my shop.  It’s strangely become a passing fancy for me after I was so fervently involved with it through this Spring.  But I have finally accomplished one of the other main goals I set for myself, and that is to build up ES’s world into something that people that were strangers to me at this time last year would enjoy, and even look forward to the continuing adventures of!  Much of that is owed to the successful launch of my ESN comic strip, which is at 34 weekly editions, and getting better every week.  Not only am I humbled by the many wonderful comments I get on my cartoon posts, but it tickles me to see my regular viewers actually beginning to recognize the characters and their personalities!  It is this recognition by others, more than any artistic touches I can apply, that gives the characters true life. 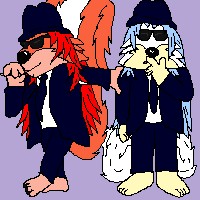 I still love that image I drew for my Welcome post.  I think it’s kind of funny I threw Buster in there, because he really wasn’t a big time character yet… but I just had a feeling he might be a star in the making.  Heck, he’s almost bigger than ES now!

Cause they told me when i was younger, “Boy, you’re gonna be President.”

Another thing this blog has become that I didn’t really anticipate in the beginning was as an advocate for real life squirrels.  I have fed on my fascination for the critters I developed thanks to ES to deliver many squirrel related topics here at The Nest, in particular, cute and interesting squirrel photos… both professional and my amateur shots.  My audience has been much more receptive to this aspect of my blog than I ever imagined… there really are a lot of squirrel lovers out there!  Or those of the sciurine persuasion just happen to all gravitate towards WordPress…. 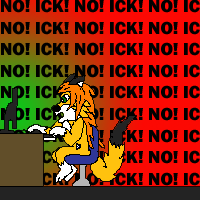 Sorry Sprots, but you’re in the minority…

I can’t help but look at my stats counter, and see that I currently have 9916 hits on my blog.  It would be cool to get to 10,000 on my one year anniversary, but given the quasi-holiday today, I doubt that will happen.  It’s still mind blowing to think I have had even close to that many visits, though…. even if over half of them just wanted to find a little Spongebob and Sandy nastiness….

Thanks to all of my regular and irregular readers who have helped to make The Nest such a success over its first year, and I’ll try to do even better for my second year!

Hmmmm. must develop a blog with 100% bioavailability…..

Bored former 30-something who has nothing better to do with his life than draw cartoon squirrels.
View all posts by evilsquirrel13 →
This entry was posted in Squirrel Droppings and tagged anniversary, blog, christmas eve, nest, santa claus is coming to town, squirrel, year. Bookmark the permalink.