Conveniently not located in New York.

Bwahahaha!!!  It’s Friday the 13th, my pretties, and it’s time for the next installment in my Millionaire Journey that promises to have more sequels than that Jason Vorhees franchise did.  If you thought last week’s episode was scary trying to survive the first hour at the Dumpire Hotel, we’re really going to turn up the horror for the occasion in this post!  Because we’re going to see what happens when the pickiest eater on the planet is faced with the challenge of finding sustenance in a city where practically everything edible the world over can be found within a two block radius.

One of the instructions contained in my contestant orientation package I picked up at the front desk was that I was to call the suite of the contestant coordinator upon my arrival and check in.

Yes, the phone in our room was actually in working order.

There was a contestant meeting I would have to attend in the coordinator’s “lush Empire suite” at 6:00 PM sharp.  After familiarizing ourselves with the shortcomings of our room, and seeing Florence the intruding maid out the door, me and my Dad had about an hour and a half to find some supper to tide us over for the day.  I was already dreading this necessary evil even before we ever set foot out onto 63rd Street to begin the search.  On every trip I have ever made before and since, I have always scouted out the area around the hotel for my comfort spots…. read, those ubiquitous fast food joints most tourists would want to avoid when away from home.  As expected, they are not particularly common to downtown Manhattan…

Mars has more restaurants I’ll eat at than New York City does.

Knowing I was probably going to strike out on a fast food joint, I focused my energy on finding my favorite thing to eat that can be found almost universally back home…. fried chicken.  I know New York City has about 3.6 delis per square block, and there isn’t a deli back where I come from that doesn’t keep some delicious fried chicken under a row of heat lamps warmed up in the window.  It might take a little walking, but surely I’d find one to satisfy my fried fowl craving.

Sorry, sir, we can’t help you. But would you like to try the marlin?

A tour of the delis on the Empire’s block turned up nothing even remotely resembling fried chicken.  That first circuit even took us past Fordham University’s law school… surely there’d be a wider selection of American food to refill the tanks of all these future ambulance chasers.  But alas… there were just more glorified Subways and eateries containing cuisine I probably couldn’t pronounce, or want anywhere near my mouth.

Ummmm…. no thanks! I’ll just live off my belly fat.

Upon making it back around to the Empire with still empty stomachs, I started to get the glare from my Dad.  My family’s had to put up with my picky ass for years now.  I am the anti-Mikey… I don’t like much of anything.  I fit George Carlin’s description of a “fussy eater” to a tee…

My Dad pointed to a restaurant across the street… let’s at least look at the menu, he implored.  It was a fancy version of Houlihan’s, or Bennigan’s, or something of that nature.  We went inside and my Dad asked the penguin at the door for a menu.  The menu was passed with the snottiest of snotty waiter scowls.  He already knew we were going to hand it back and leave.  You can tell it’s not going to be an eatery for me if the menu prices are all listed as generic whole numbers after the description of each item.  Nothing says you’re going to be outrageously overpaying for dinner more than a lack of decimal points. 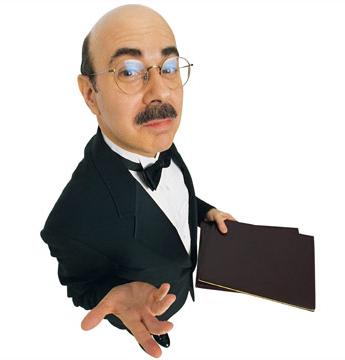 Now can I please have a ten dollar tip for you unwashed hillbillies wasting my time?

So the hunt for dinner continued on down 63rd Street.  My caveman ancestors probably never had to roam this far to find something to eat… and apparently not all of the fussy eaters from that prehistoric time were done in by natural selection, or maybe I’m just hardheaded.  About five blocks down from the hotel, we finally came across a large deli… one that actually had a very wide selection of items!  I was excited and relieved, surely this place had the fried chicken I was looking for!

Or not…. looks like a nice place to get a shit sandwich, though.

Seriously, I think this place had a wider selection than the Golden Corral buffet… but not a single thing that looked edible to me!  This is getting ridiculous!  Dad asked one of the workers there if there was any place near here where one could get some fried chicken.  Since New York delis apparently fall under the same labor codes as the transportation sector, 99,99994% of all deli workers in New York do not speak English as their native tongue.  All the question did was confuse the workers, and net us a series of shrugged shoulders.. apparently a universal gesture for “get the fuck out of our deli.”

And right back out on the street we went.

We were half a mile from the hotel, the hour of the contestant meeting was drawing near, and I made it perfectly clear to Dad that I was conceding supper.  Let’s just head back to the hotel… I’ll find a shop with some snacks, it wouldn’t be the first time I’ve survived on chips and crap, and Dad can just get whatever he wants.  Dad was just starting to have leg problems from his diabetes at that time that limited how long he could walk around, and my stubbornness had forced him to near his limit.  Not to mention it was a typical chilly January late afternoon with temperatures around 40 F, which made the futile hike even more miserable.  So back to the Empire we trudged, cold and hungry…and that’s when we noticed that the hotel had a little market attached to it that we’d somehow passed up the first time around.

Woohoo! I’ll have me some frozen possum please!

It was one of those typical little grocery markets that can be found in a big city… this one run by an Asian family.  OK, I can pick up some snacks here, Dad can get what he wants, and we’re good!  Wait a minute… they have a buffet!  Erg… lots of the typical weird stuff that might be tasty overseas, but isn’t going to be satisfying this tummy anytime soon.  Wait, what’s this?  It kinda looks like chicken wings…. it’s definitely some kind of bird…. doesn’t seem to be fried, but also doesn’t look too disgusting not to eat.

Some things are better left a mystery.

I will not starve on this trip!!!!  I’ve found some pseudo-chicken!!!

The mystery meat didn’t even taste that bad.  And it went perfectly with the small box of Ritz crackers I also bought at the Empire Market that put me back an entire five spot.  Seriously, with the cost of living in New York, I’m surprised I was the only one having trouble finding something to eat!

The only way to dine in the Big Apple!

Well, that was a fun trip around the Empire’s neighborhood!  And in my book, it even counts as sightseeing!  I’ve got something in my stomach, and it’s just about time to head upstairs for the big contestant meeting!  I can’t wait to meet my competition…

I just hope there are no plumbers or architects in the bunch!

Until we meet again next Friday!

Bored former 30-something who has nothing better to do with his life than draw cartoon squirrels.
View all posts by evilsquirrel13 →
This entry was posted in Millionaire Journey and tagged abc, chicken, contestant, deli, dinner, empire, food, fussy, game show, hotel, market, millionaire, new york, picky, restaurant, supper, walking, wwtbam. Bookmark the permalink.