Merriam Webster’s website is quite well known throughout the internet community for its Word of the Day feature, and just recently, Sprotsie has decided to pass along the word of the day to those of us heathens over on the forum, as well as a few other words she’s had stored up.  One of those words was deliquesce, which means to dissolve or melt away.  In a rare display of contextual deduction, I was able to figure out what the word meant simply from her sample sentence she used… and what’s more, I posited that Sprotsie probably deliquesces herself whenever she sees ES at her screen door.  That led to the above picture, which currently has her not speaking to me.  Oh well, she’ll get over it.  It’s adorable…

But that gave me an idea for a blog post (which I desperately need!).  I decided to go to the MW Word of the Day site, and pick a random week out of their archive, and see if I can match each word up to one of my past drawings.  Let’s choose a random Monday from the recent past…. how about December 12th, the annual date on which I begin my Top 20 countdown of my favorite ES avatars of the year.

December 12 Word of the Day:  Zeitgeist

Definition: the general intellectual, moral, and cultural climate of an era

Fanny did a game called Decades on our forum a few years ago, and I came up with the idea to do special avatars for each decade in the game, which covered the 1950’s through the 2000’s.  This was my 50’s avatar, featuring ES and MBRS dancing to that newfangled rock and roll coming out of the jukebox.  It perfectly captures the zeitgeist of that decade, or at least how we remember it thanks to American Graffiti and Back to the Future…

December 13 Word of the Day:  Swivet

Definition: a state of extreme agitation

Why must you be such an angry young squirrel?

No avatar captures swivet quite like this one did.  I was quite upset with someone who I felt had betrayed me, and drew this as a warning to them that I was none too pleased.  Maybe no drawing I have ever done has done a better job at capture raw emotion than this one.  You don’t want to see ES mad….

December 14 Word of the Day:  Taciturn

Angel is probably my best example of a taciturn character, as she generally plays the role of reactor and lets her body language tell the story.  But I chose this avatar instead, as its express purpose was one of  quiet bemusement over a certain situation.  Namely, this avatar dates back to August of 2009, when the Tea Party movement was in full swing, and someone dropped the term “teabagger” on the forum, not realizing the not so innocent alternate meaning of the term.  While that created quite a commotion among the more politically-minded of our group who thought the term was used on purpose as a slight, I didn’t see what all the uproar was about.  I had never heard the “dirty” meaning myself, and showed how overblown I thought the whole brouhaha was with this drawing of ES and MBRS blandly staring at a cup of tea.

December 15 Word of the Day:  Conversazione

Definition: a meeting for conversation especially about art, literature, or science

This just appears to be a fancy way to spell conversation, just like adding an E onto the end of artist makes you a snobby elitist.  But I found this manipulated avatar of mine containing the grandkids of one of our forum members, and they are most certainly having a conversation about art!  There is an ES drawing to cover everything…

December 16 Word of the Day:  Foment

Definition:  to promote the growth or development of :rouse, incite

Squirrels are people too!

Foment is a word that’s already in common use on the forum, and I’d imagine fomenters can be found in all kinds of internet groups.  The most common type of fomenting is the posting of inflammatory political tripe, and in this avatar here dating back to March 2010, ES and MBRS jump on the bandwagon of the health care reform movement to push for squirrel reform, and take down the imaginary restraining order against rodents in the state of Colorado.  Bring the tanks, bring the tear gas, but I don’t think MBRS is budging one bit…

December 17 Word of the Day:  Raillery 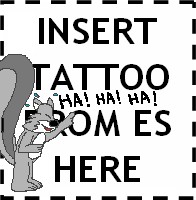 ES laughs at your request!

We partake of a lot of raillery over at the message board, and the example avatar for this word is my very first attempt to “hijack” another member’s avatar to insert my artwork.  We have a kid over there (well, he was 20 when he joined us in 2008, and that’s young to me!) who has been begging for his own piece of ES artwork ever since his 8th post!  I have teased him and teased him over the years, and this was one of his attempts to get a tattoo avatar.  So I countered by adding ES laughing over his text and put it up as my own.  Poor kid, I still haven’t drawn anything for him.  Now I’m just a big meanie….

December 18 Word of the Day:  Kegler

Definition:  a person who bowls: a bowler

It takes concentration to pick the 7-10 split.

I began bowling in a league again back in August 2010, and drew this avatar of kegler ES to memorialize it.  I don’t know what’s more hideous, the tri-color house shoes or the pink Hello Kitty ball….

So there you have it, a week of words brought to life by archived ES artwork!  You may now consider your vocabulary to be amplified, and your hunger for fine squirrel artwork to be satiated.  Until next time, keep looking up those dirty words!

Bored former 30-something who has nothing better to do with his life than draw cartoon squirrels.
View all posts by evilsquirrel13 →
This entry was posted in Squirrel Droppings and tagged conversazione, deliquesce, dictionary, foment, kegler, raillery, swivet, taciturn, word of the day, zeitgeist. Bookmark the permalink.