There are many technological advances that I loathe and frequently complain about on this blog, but if there is one that has been a blessing for me, it has been the development of digital photography.  The number of photographs I have taken over the past four years

using and reusing one single memory card would have taken hundreds of rolls of standard film at several bucks a pop.  I got a 35 mm camera for Christmas back in 1988, and I had a lot of fun taking pictures with it on the rare occasions I was allowed to have a roll of film.  The only bad thing was the knowledge that as that little number on the back of the camera that tracked how many shots I had taken began to creep up towards the limit for that roll (usually 24 or 36), the more I had to decide if something was really worth taking a picture of or not.  There were no do-overs in real film photography, no button you could press to erase a image… once it was burned onto the film, it was there until the photo developer you took your pictures to could laugh at your shitty photography.

A lot of my photos from that camera looked something like this.

In the early days of amateur photography, you had to take your film to specialized photo processing studios to turn your negatives into positives.  As time marched on into the 1970’s and 80’s, photo processing became much more convenient, as many retail and grocery stores allowed their customers to drop off their film while they were shopping for processing at some business they contracted out to… although it usually took several days before your photos came back.

48 hours is worth it for the lifetime of embarrassment opportunities!

At the same time, the one hour photo processing market was just beginning to heat up.  These were little shops that would process your film while you waited, and didn’t allow their employees time to marvel at those nude shots you took of yourself for more than a few minutes.  Working on a tight budget, the geniuses that brought us access to this almost instant photo gratification decided that the best place to set up shop would be on mall parking lots.  If you’re old enough to recall the days of flash cubes, you definitely remember these little parking lot warriors because they were almost everywhere!  While Fotomat, which I led off this post with, was the most popular… as a true child of the 80’s, the photo kiosk company that will always be nearest and dearest to my heart was the legendary Fox Photo. 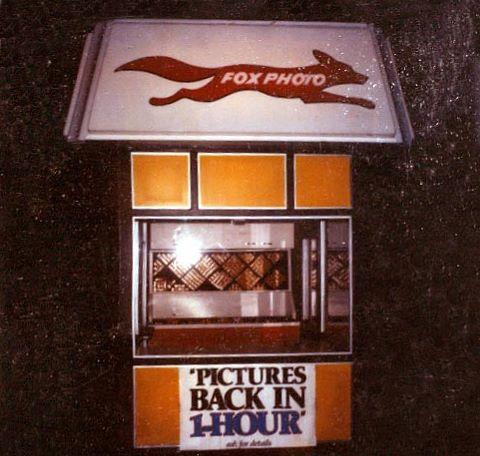 Greyhound only wishes their logo were this cool.

The most famous photo kiosk in pop culture history was a Fox Photo booth.  It’s what the Libyans crashed into after Marty McFly vanished into 1955 in the movie Back To The Future.  Forward to around the 1:00 mark of this video….

Seriously, these kiosks were totally ubiquitous during my childhood days.  I think we had two of them in my cowtown alone, and it’s not like we had any really big malls.  Yet while the heyday of these tiny little photo labs was at its peak in the early 80’s, the business would be on life support by the time Ronald Reagan (the actor!?!?) left office.  Both Fotomat and Fox Photo began to shutter their tiny cubicle sized slices of picture making heaven in the latter part of the 80’s, and by the mid 90’s, the one hour photo kiosk had gone the way of the dinosaur.  It wasn’t digital photography that did in these oversized tollbooths, but the fact that by 1990, their one hour photo service had become feasible for set up in larger stores.  These in-store minilabs were much cheaper to operate, and thus, could offer prices the kiosks couldn’t match.  The Fotomats and Fox Photos that were hustling and bustling in the 80’s became the parking lot eyesores of the 90’s. 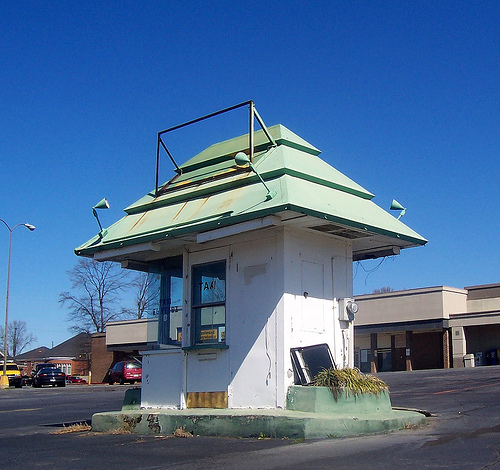 Someone just hit me with a VW van, please!

We here at The Nest would like to salute these small but powerful little centers of photo developing that came to represent a time when you were totally dependent upon someone else to turn your pictures of the kids taking a bath together into cherished family memories.  While we won’t miss the constant cost of buying and developing film, we will miss the cheesiness of your small fry in a big mall business model that was done in by the very stores whose parking lot you had invaded.  Thank you to Fotomat, Fox Photo, and all of the other wonderful one hour photo stores that operated out of an outhouse… this Kodak Colorwatch approved picture is just for you!

Smile everybody and say “DRIVE THRU!!!”

Bored former 30-something who has nothing better to do with his life than draw cartoon squirrels.
View all posts by evilsquirrel13 →
This entry was posted in Flashbacks and tagged back to the future, camera, developing, flashback, fotomat, fox photo, friday, kiosk, mall, memories, one hour photo, parking lot, photography, pictures, retro. Bookmark the permalink.