In past posts reminiscing on the history of how Evil Squirrel and friends came into being, I’ve more than covered how the squirrel came to be the creature of choice in my artwork.  I also detailed the part my longtime soft spot for the raccoon played in shaping this artistic endeavor of mine.  But there is a third wild species that is near and dear to my heart, and if you’ve seen enough of my work on this blog, you shouldn’t have any trouble guessing what it is…. unless like my mother, you think everything I draw is a squirrel….

Of course, I am referring to the skunk.  Skunks are generally even more unpopular and disliked than squirrels are, for the quite obvious reason of how they like to greet unwanted guests.  They are unpopular enough that I have yet to find a skunk figurine of any kind to put on the shelf with the rest of my silly trinkets that sit behind me while I type up this crap.  Which is quite sad, because the skunk really is such a beautiful animal…

And as gorgeous as they are in real life, they translate better than almost any other kind of animal does into the anthro art world.  Their popularity in the furry art community is immense, and it didn’t take me long on my own to realize that even with my , errr, amateur art style, they were the perfect choice when a cute character was needed.  And for an animal that generally comes in just one color pattern, they go perfect with almost any other accenting hue…. and most importantly as far as identifying marks go for my art, they work well with a rainbow of hair colors. 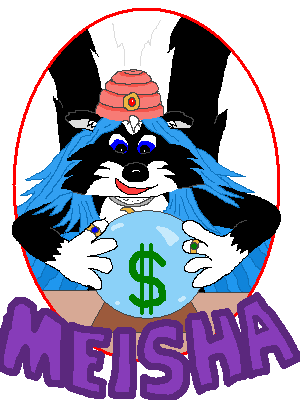 And it’s the endless possibilities in the hair color department that make the skunk my absolute favorite critter to use for a female character…. though it isn’t a designation I give out lightly….

“Only the cute girls get to be skunks.”

Fanny knows me all too well, and there is so much truth to that observation. 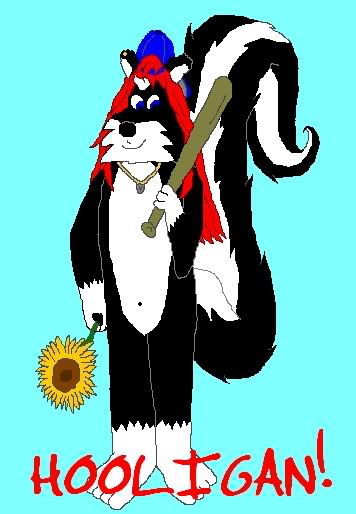 Skunkette with a baseball bat and backwards cap….. cute, dammit!

While generic female skunks of all types made appearances in my early portraits, Hooly was the first girl of my message board to get the skunkette treatment.  I don’t think she ever fully understood or accepted the designation, but the artwork won her over nonetheless.  Free your mind, and the rest will follow….

A bullriding skunk, don’t think nobody has ever done a search for one on Google before…

Meisha wasn’t around our group for long, but she came along at just the right time to earn her spot in the annals of Evil Squirrel lore.  There was a time when I was even more taken with her than I was with Hooly, and when I decided to honor her with a portrait in my series, the skunkette was the only option.  She loved it, and even told me it inspired her to purchase a pair of red cowboy boots.  Evil Squirrel has stimulated the economy more than the past ten Presidents combined…

And then there is Hottie, the blonde haired skunkette.  While she didn’t really fit into the mold of Hooly and Meisha, she was (and still is) one of my favorite people on earth and perhaps the sweetest person I know.  To honor her with anything less than my ultimate compliment of the skunk treatment would have been a crime, and Hottie recognized this and appreciated it.  There have been no new female skunk characters added since Hottie three and a half years ago, and there never may be another one. 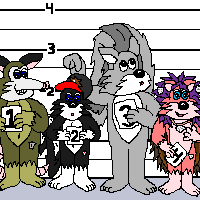 Psst! Are you forgetting someone?

The only new skunk character who has been added to the gang in the last three years has been the beloved Stinkerball.  Of course, he HAD to be a skunk, so it wasn’t an actual choice on my part to pick that species for him.  And it’s unlikely another male skunk will be joining him anytime soon since with the way my artwork comes out, he’d be hard to differentiate from any other skunk boy.

I’ll now wind down my discussion of nature’s most odorific cutie with a few famous and not so famous fictional skunks from the world of cartoon art….

Peekaboo! I sprayed you!

ES Fact #811: Flower the skunk from the Bambi movie was the most significant inspiration behind my making Hooly’s character a skunk.

I come from France, I need no deodorant, no?

Pepe le Pew is undoubtedly the most famous skunk in pop culture.  He was inventing the concept of pathetic attempts at romance long before ES, or his creator, were even a gleam in anyone’s eye. 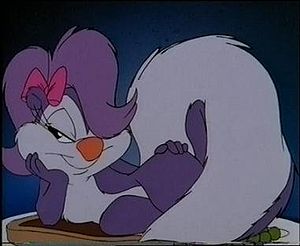 Mama warned me about all those fanboys out there….

As a man, I have been pissing in urinals since I was big enough to….. um, reach them.  And I recall many of those fine urinals from back in the day had mints (Yes, I always call them urinal mints, I think I got that from Beavis & Butthead) that featured a logo of a skunk on them.  It took a bit of digging, but it was Aire Master, one of the few but proud companies in the world sporting a polecat mascot.  This whiz is for you, Aire Master Skunk!

And while I’d like to add a few of my favorite recurring skunk characters from the anthro art world I follow and continue to be inspired by, most of my favorites have pictures that…. well, I just couldn’t bring myself to post here even as cute as they are.  But I would like to share one that can be posted, and is seriously one of the most magnificent pieces of furry art I have ever seen in my five years as a fan.  The character is Valencia, created by James Hardiman (one of the best skunk artists out there, period), and the artwork itself was done by another talented artist, Dark Natasha.  Click on the picture below to see it at its full resolution, the only way it can truly be appreciated. 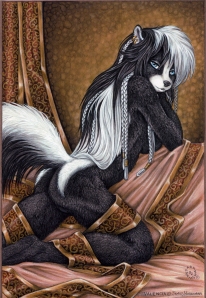 Sure, I may be twisted, but that is still an awesome piece of artwork nonetheless.

Much like the squirrel, it’s time the skunk got its due.  Here’s to appreciating our black and white furry friends a little better, from a safe distance of course…..

Bored former 30-something who has nothing better to do with his life than draw cartoon squirrels.
View all posts by evilsquirrel13 →
This entry was posted in Artwork, Squirrel Droppings and tagged anthro, appreciation, art, black, cute, hair, hooly, hottie, meisha, skunk, skunkette, smell, spray, stink, white. Bookmark the permalink.

4 Responses to That Smell…