Even Mecca superstars get thirsty for some pop….

It’s time for this week’s feel good edition of Mecca Muzak Monday, where my homepony Scratchy will spin another groovy platter from the Mecca CD for your enjoyment.  Don’t forget to tip your deejay.

One thing I find fascinating about the song selection for the muzak CD’s that play in fine Meccas across the country is that they are rife with not just obscure artists, but a lot of musical acts that are classified as “indie.”  It’s incredibly ironic that an entity like Mecca that practically embodies corporate America seems to be giving a lot of independent artists exposure to the masses over its speakers. 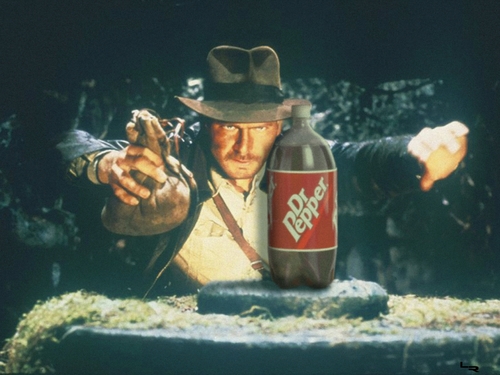 Today’s featured act is Matt and Kim, an indie duo featuring….. well, Matt and Kim.  Matt Johnson and Kim Schifino have been around for about a decade now.  They first gained attention for themselves with the video they shot for their 2009 song “Lessons Learned,” which went viral on YouTube, and featured the dynamic duo stripping naked as they pranced through Times Square on a cold February day.

If my nips were frozen and blue, I’d want them blurred out too…

Matt and Kim first came to my attention with a horrific song from their 2012 album “Lightning” that was featured early on the 2013 Summer CD, “Let’s Go.”  Tell me Matt doesn’t sound like Weird Al singing this song… that’s who I honestly thought it was when I first heard it.

The duo made up for it with a killer hit I just adore from the same album that was a part of the Fall CD last year, “It’s Alright.”  Once again, I’m going to post the video here since it’s available on YouTube… and it’s a bit…. um…. well, just watch for yourself!

I guess you wouldn’t expect anything less from a couple musicians who weren’t afraid to run around New York City in their birthday suits.  The choreography is quite impressive and the idea is very original, though the result somewhat creepy….

Sorry, the eye bleach is out of stock.

Both “Let’s Go” and “It’s Alright” have returned for the current Mecca Muzak CD, which should be playing in stores through at least the end of August.  If you happen to stop by Mecca sometime this summer, listen for Matt and Kim.  Just two of the many indie artists who are making your shopping experience more enjoyable…

This music SUCKS! And these insoles I just bought smell like lotion!

Bored former 30-something who has nothing better to do with his life than draw cartoon squirrels.
View all posts by evilsquirrel13 →
This entry was posted in Mecca Muzak and tagged artist, indie, its alright, kim, matt, matt and kim, mecca, music, muzak, walmart. Bookmark the permalink.