Mel Brooks is one of the absolute geniuses of movie comedy.  For several decades, he was 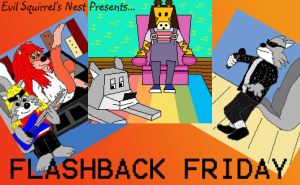 the Weird Al Yankovic of Hollywood, turning out spoof and hilarious spoof of just about every genre that ever wound up on a film reel.  There are some purists who will tell you that nothing can possibly top the classics Brooks created in the 1970’s, and you will get no argument from management at The Nest about the high comedy that was “Blazing Saddles”… but unfortunately, my knowledge of these early Brooks masterpieces is pretty much limited to that one movie.

Excuse me while I whip this out…

One of Mel Brooks’ later films, however, came along at just the right time for me to enjoy it over and over and over again… and it is one of my favorite movies ever.  That would be the 1987 intergalactic spoof “Spaceballs”, starring Bill Pullman, John Candy, and Rick Moranis among many others.  Spaceballs is the subject of this week’s Flashback Friday!

If you want a good synopsis of the movie’s plot and the wacky characters involved in it, I highly recommend reading the Wiki page on Spaceballs.  To sum it up briefly, the planet Druidia is being targeted by the evil empire known as the Spaceballs, who are running out of fresh air at their home base Spaceball City and want to steal the planet’s atmosphere.  They want to kidnap Druidia’s Princess Vespa, however she runs away from a forced marriage to Prince Valium, and her father King Roland summons space maverick Lone Starr to find her.  The rest of the movie plays off of the original Star Wars franchise, with the battle of good vs. the evil Spaceballs, headed by President Scroob and Dark Helmet… as well as a mysterious power called The Schwartz. 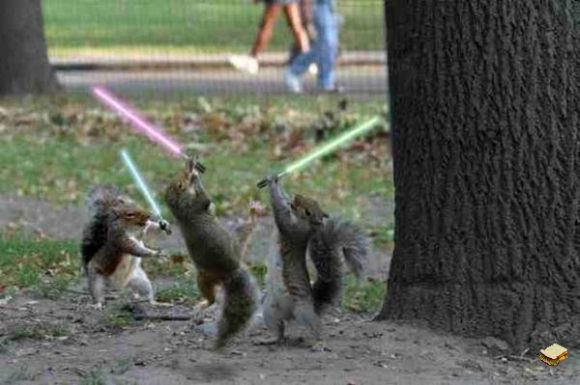 I see your Schwartz is as big as mine!

The plot is just there to hold the movie together, though.  The best thing about films like this are all the hilarious gags and great lines that are the real sendup to the films and other pop culture references that are being parodied.  So I’m going to run off some of my favorite scenes and skits from Spaceballs for this post… and no, there’s no way I can possibly cover every great, funny moment from this movie.  So feel free to add some more of your favorites in the comments section!  YouTube videos of the scenes are linked to where I could find them….

You Went Over My Helmet!

In a parody of the Star Wars scene where Darth Vader used the Force to choke Admiral Motti, Dark Helmet is upset at the beginning of the movie that one of his subordinates has notified President Scroob that the ship is approaching Planet Druidia before he could have the chance to.  Helmet whips out his Schwartz ring and proceeds to fire a crushing beam on the poor man’s jewels.  This becomes a running gag throughout the movie, as the crew of Spaceball One constantly cover up their crotches in fear of this punishment. 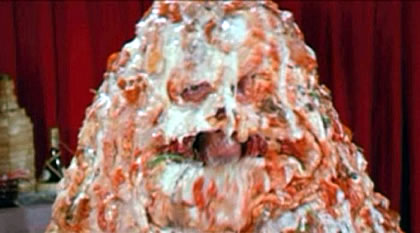 What I could do with one million spacebucks!

Spaceballs’ answer to Star Wars’ Jabba the Hutt, Pizza the Hut was a gangster who Lone Starr owed a large debt to.  Pizza only appears live once in the movie, a video call where he demands Lone Starr pay him one million spacebucks to cover a 100,000 spacebucks debt by tomorrow.  This is one of the most ingeniously insane characters ever to appear in a movie… a giant blob of pizza turned loan shark.  Things get a bit uncomfortable when Pizza’s sidekick Vinnie starts nibbling off of him and calling him delicious.  Fortunately for Lone Starr, Pizza eats himself to death by the end of the movie, absolving his debt.

Beam Me Up, Snotty! 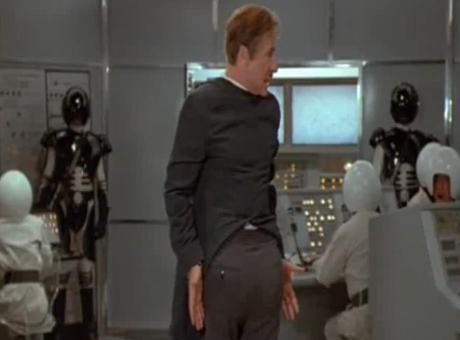 Why didn’t someone tell me my ass was this big!?!?

When we first meet President Scroob, he needs to go from his office to the command center of Spaceball City.  Commander Zircon offers to save him a walk and have Snotty beam him down, an obvious reference to Scotty from the Star Trek series.  Scroob is reluctant to be beamed, but goes for it anyway, and lands at Central Command with his head on backwards, looking down at his big butt.  Five years before Kris Kross hit it big, Mel Brooks was showing us what it looked like to wear your clothes backwards.  Scroob is beamed back to his office the correct way, refuses to be beamed again, and instead walks to the command room himself… which turns out to be right next door!

With Princess Vespa in sight, Spaceball One’s forces try to shoot her ship down to capture her… however, true to typical sci-fi logic, the bad guys never seen to be able to shoot straight.  When Dark Helmet complains, it’s revealed that the gunner is cross-eyed, and he was hired by his cousin, Major Asshole, who is also cross-eyed.  When Dark Helmet rhetorically asks how many Assholes does he have on this ship anyway, all but one of the crew stand up to acknowledge that they too are an Asshole!  No wonder evil never triumphs over good. 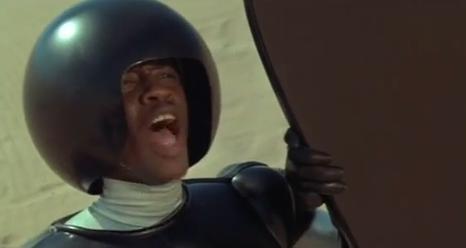 The heroes crash on the sandy planet of Vega, and President Scroob orders his henchmen to go there and “comb the desert!”  Dark Helmet orders his troopers to do this… literally, with huge combs.  It’s so corny, but one of the best visual gags of the entire movie, and it’s made even better by the last pair of combers who are using a pick and are black.  Mel Brooks was never afraid to throw out a bit of racial humor (Blazing Saddles was practically built on it), and the pick bit is funny without being demeaning.

What do we have on this thing, a Cuisinart!?!?

Probably the best remembered and most often referenced gag from Spaceballs is the memorable scene where the ship goes to “Ludicrous Speed”.  With the good guys getting away due to their hyper drive, Dark Helmet orders Col. Sandurz to go to ludicrous speed, because light speed isn’t fast enough!  This causes their ship to zip past Lone Starr’s Winnebago, leaving behind a trail of plaid colors.  Ultimately, the brakes are applied and Dark Helmet goes smashing head first into the ship’s console due to his refusal to buckle up.

I Didn’t See You Playing With Your Dolls Again!

Dark Helmet plays with his dollies!  A great throwaway scene in the movie, as well as one of many references made to the movie’s excessive array of licensed merchandise, which pokes fun at how George Lucas built a toy empire off of Star Wars.

Bring this guy some Pepto Bismol!!!

No recap of great scenes from Spaceballs would be complete without the tribute to the movie “Alien” towards the end.  In a scene at a space diner, John Hurt is suddenly overcome by something he ate, and like in “Alien”, he has a rather ugly looking alien spawn emerge from his stomach.  This spawn jumps on the counter, dons a straw hat and cane, and dances down the length of the counter singing “Hello Ma Baby!”  A classic WTF? mix that works out just perfect for comedic effect.

With Vespa in their clutches, Dark Helmet manages to extort the combination to Druidia’s protective shield from King Roland so that they can suck out all of the planet’s air.  The combination turns out to be 1-2-3-4-5, which Helmet proclaims sounds like the combination an idiot would have on his luggage.  Enter idiot President Scroob!

Thank You For Pressing The Self Destruct Button! 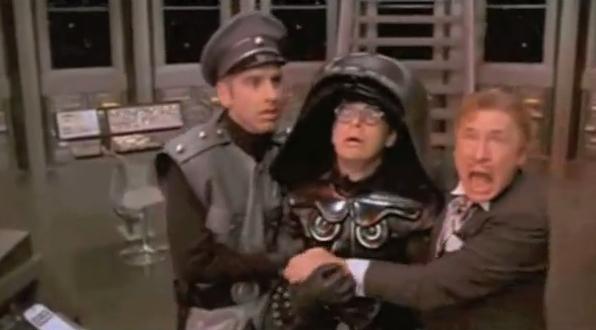 Nothing quite beats the climactic scene of the movie, where after a mano y mano battle with Lone Starr, Dark Helmet accidentally hits the self destruct button for Spaceball One.  The panic scene as Scroob, Helmet and Sandurz try to get an escape pod to flee the doomed ship, only to continually lose out to all of the wacky cast of misfits on the ship is full of great gags!  My absolute favorite, though, happens to be Dark Helmet fighting it out with the freak show’s Bearded Lady for one of the pods…

The Bearded Lady bosom bumps Helmet out of the way and grabs the pod.  As he/she takes off, Dark Helmet leaps to the window to shout at her and delivers what is literally one of my favorite lines from any movie, EVER….

Here is the full escape pod scene for you to enjoy, complete with the Spaceballs theme that was performed by The Spinners!  Yeah, who knew they were still relevant in the 1980’s?

Like I said, there are so many more great scenes and lines from the movie I didn’t have room to include unless I wanted to make this post the length of a NaNoWriMo novel.  I hope you enjoyed the flashbacks I did select to one of the coolest movies of the 80’s, and as always, may the Schwartz be with you!

Bored former 30-something who has nothing better to do with his life than draw cartoon squirrels.
View all posts by evilsquirrel13 →
This entry was posted in Flashbacks and tagged 80s, bearded lady, comb the desert, flashback, funny, ludicrous speed, mel brooks, movie, parody, schwartz, snotty, spaceballs, spoof, star wars. Bookmark the permalink.

36 Responses to Prepare For Ludicrous Speed!