I see they did a wonderful job with your makeup, sir!

Fridays have been a lot of fun ever since Julius Caesar invented the calendar (or was it the salad?).  But Fridays have been getting even more exciting ever since I’ve been posting my concise little story about my Millionaire appearance, and given how close we are to showtime, you’ve no doubt been frantically looking at your phone every few minutes wondering if Friday would ever get here so you can get your next fair share of abuse.  Well, it’s TGIF again, and we’re all dressed and prettified and a rarin’ to go!  Let’s get this thing on! 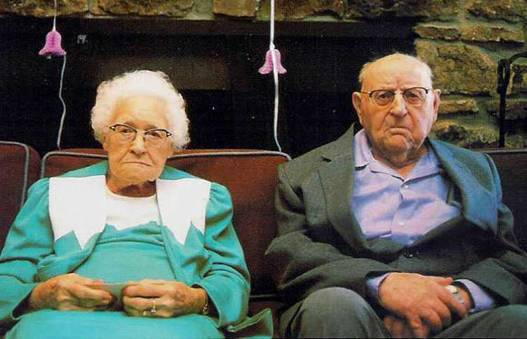 It’s about damn time! We’ve been following this saga ever since it was a radio serial!

So there we all are, lined up and waiting underneath the bleachers on the Regis side of the studio.  The audience is getting to watch a highlight tape of past Millionaire moments on the big screen.  Even though I can’t see the video, I’m enough of a fan of the show to be able to identify many of the scenes just by the audio.  The first contestant to ever miss the first question is on the montage.  The contestant who called Rosie O’Donnell as a Phone a Friend is there.  And all of the million dollar winning moments are represented… ending with the first contestant to win the top prize on the US version, John Carpenter, who rather smugly phoned his father on the last question to tell him he already knew the answer and was going to win the million.

And he worked for the IRS… which made him even more lovable as a contestant.

But nobody on that highlight reel is going to be playing for the stakes we are today.  Million schmillion… we’re going for a purse of $1,860,000 thanks to the added jackpot I’d mentioned earlier.

Once the highlight tape is over, and the audience is finished responding to the flashing APPLAUSE sign, we can hear a guy on stage instructing the audience on how to use their Ask the Audience controllers should they be called upon for that lifeline.  He gives the crowd this piece of advice… “don’t vote if you aren’t sure of the answer!”  Surely nobody would jeopardize a contestant’s fortune by doing that, right? 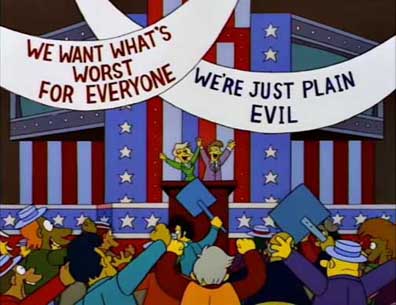 Americans love to vote for a loser!

While all this is going on, J.P., the associate producer who is now presiding over our group, gives us directions about how we are going to go on stage.  We will each get a nice, formal introduction and walk out after our name and hometown has been called… a lot like at football games where the starting players come out of the tunnel and break off a little something something while they’re being introduced.

Ray Lewis may have murdered a man, but he had a pregame dance called “The Squirrel”, so he can’t be all bad.

Well, we weren’t encouraged to dance, but J.P. did tell us it would be wise to acknowledge the crowd with a wave since our fate may very well be in their hands at some point and the last thing we wanted to do was turn the audience against us if we ignored their fake enthusiasm for us…

Who Wants To Be A Millionaire was somewhat unique among the hall of game shows in that it did not have an announcer.  Any announcements or pre-show narration was usually just done by Regis himself.  This meant that there would just be some flunky behind the mic when we were all being given our grand introduction.  Sorry, but that’s just not gonna cut it for this epic masterpiece I’m penning.  It’s my story, so I’m going to find a REAL announcer to do some REAL announcing…

Sure Michael Buffer and his overly trademarked and copyrighted signature line may be a tad expensive to rent for a blog story about a game show taping…. but after all the torture I’ve put you guys through, I only want to bring you the very best!  Alright, DJ Scratchy, queue us up some killer intro music on the Kenwoods….

Ladies and gentlemen….. welcome to the MAIN EVENT!  These eleven contestants have come from all over the country to compete for the heavyweight championship of the trivia worrrrrrld, and a purse of ONE MILLION, eight hundred and sixty THOUSAND dollars!  And now…. let’s meet today’s challengers!!!

Sitting in Seat One…. from beautiful downtown Birmingham, Alabama… where they all love the governor…. The Rock’s number one fan…… WYYYYYYYNEEEEEEEEEMA KIMBROOOOOOOOUGH!!!!

Coming out to Seat Two…. the Greek Goddess from Athens, Tennessee… the Belter of Broadway…. AAAAAAAMYYYYYYYYY TURNERRRRRRRRRRRR!!!! 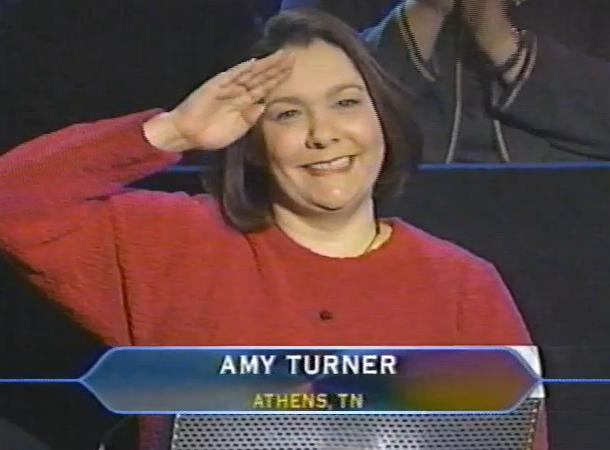 In Seat Three…. from the fabulous city of rock and roll, CLEEEEEVEland, Ohio…. a nice warm welcome for PATRICKKKKKK SHAAAAAAAAWWW!!! 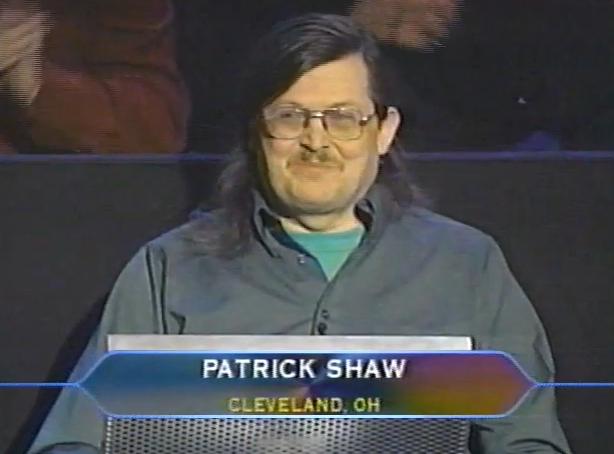 In Seat Four…. the man who don’t need no STEENKING Phone a Friends… coming all the way from the borough of Brooklyn, New York… YO!!!!  Let’s give it up for BOBBYYY CONNNNCEPCIIIIIIIIIIIOOOOOOON!!!!!

In Seat Number Six…. from the city that NOOOOOObody knows is the capital of Washington… put your hands together for JACKIIIIIIIIIIIIIIIIIIIIE WALLLLLLLLLLLLTERRRRR!!!

In Seat Seven…. yet another representative from that brain center state of the USA…. Strongsville, Ohio’s very own….. KEVINNNNNNNNN OOOOOOOOOOOOOOOOOO’NEILLLLLLLLLLL!!!

In Seat Eight…. coming to us all the way from the acorn capital of the west coast… OAKley, CaliFORNia…. the one and only…. DENIIIIIIIIISSSSSSSSSSSE SPEEEEEEEEERRRRR!!!

In Seat Nine… the squirrel without whom nobody would know what to do with their Fridays anymore…. from that cesspool of the Midwest, Granite City, Illinois…. Put your paws together for EEEEEEEEEVILLLLLL SQUIRRRELLLLLLLL!!!!

And in Seat Number Ten… from the city by the bay… the original San Francisco treat…. ANDREA….. CARLA…….. MIIIIIIIIIICHAELLLLLSSSSS!!! 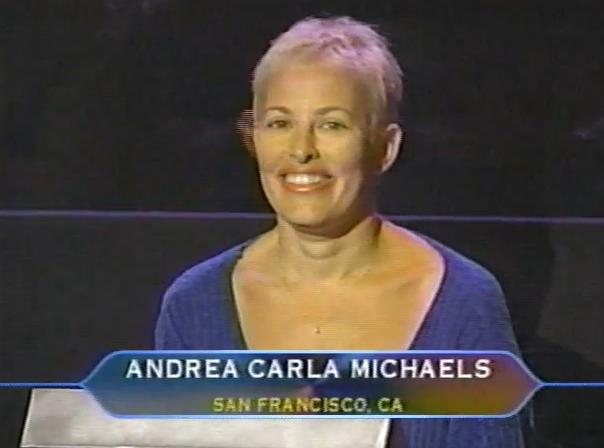 And starting out the afternoon in the Hot Seat…. from the city limits of Austin, Texas…. a nice hand for our carryover…. EEEEEED TOOOOOOOOOUTANT!!!!!

And now….. the moment you’ve all been waiting for….. the man who will preside over today’s meeting of the minds…. let’s have a rousing Big Apple ovation for the pride of Notre Dame University…… THE ONE AND ONLY…….. REEEEEEEEEEEEEEEGISSSSSSSSS PHILLLLLLLLLLBINNNNNN!!!!!!!

Holy shit!  I had no fucking idea they’d even snuck Regis behind us as we were waiting to come out on stage!  Needless to say, the place erupted when Da Reege stepped out from the same entrance I had just stumbled through not even a minute ago before tripping over my Bendy Side barrier yet again.  This was Regis’ time to grab the mic and give everyone his well-worn speech about how he “saved the ABC Network.”  No, Regis isn’t a superhero in his spare time… he just happened to be selected as the host for this new game show import from England ABC decided to try out in late 1999 that managed to click at a time when most of the network’s shows were competing with C-SPAN for ratings.  On the coattails of Millionaire’s success, ABC lifted themselves up out of last place and once again became a viable network.  TV critics heaped the praise upon Regis for ABC’s turnaround, and the host was very humble about accepting all of the credit for it.

You know… I coulda saved The Tonight Show if they’d have just asked me.

After yet another loud ovation once Regis was done patting himself on the back, he ducked backstage again while everyone got ready for the actual start of the taping.  This is the cue for Q who’s waiting in the queue… 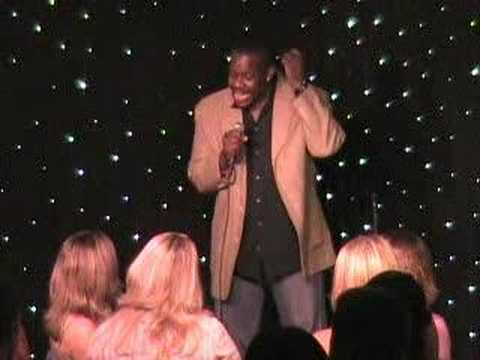 I hate it when people get Q-te with my nickname!

No, I’m not referring to the Nesquik Bunny.  Quentin Heggs was the longtime warmup comedian for Who Wants To Be A Millionaire, but everyone just called him Q since it made him sound so much cooler while also making it easier for him to sign his checks.  If you’ve ever been to a taping of a television show, you’re probably aware the producers have an in-house comedian who interacts with the audience before the tape starts to roll, as well as during taping breaks.  The job of the warmup comedian is more than just making coffee for the show’s host, they are in charge of keeping the audience cheery and perky so that they look alive and engaged when the cameras are rolling, rather than bored and disinterested from the long and sometimes grinding process that can plague a television taping… 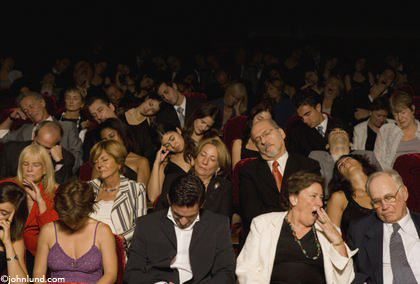 I could probably use a warmup comedian for my story…

Q’s secondary job is to hand out freebies, and he has a whole armload of cheap Millionaire T-shirts to give out at random to the audience.  During this pre-taping break, Q has decided to challenge the audience to stump him on his massive knowledge of TV show theme songs.  Name a show…. any show… and he’ll perform the theme.  Stump him, and you get a fine quality T-shirt to keep as a grease rag in the trunk of your car…

Alrighty, Q. Let’s see you do the theme to 60 Minutes!

Somewhere along the line, this young, somewhat nerdy looking girl who was sitting behind and to my right challenged Q to do the theme to “The Fresh Prince of Bel Air.”

Q looks around at the audience like, “Can you believe this white chick thinks I wouldn’t know the theme to The Fresh Prince of Bel Air?”  After the audience is done having a laugh at the naive young lady’s expense, Q would like to know if she even knows the words to the Fresh Prince theme… 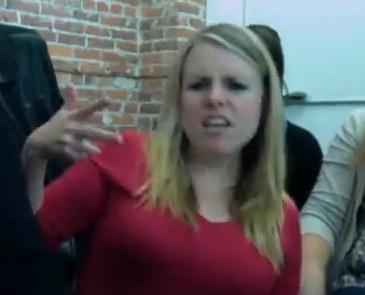 Fuck yeah!  It’s time to get my gangsta on, fool!

Q could do nothing but stand there surprisingly impressed at how she was going for hers by breaking off some classic Will Smith.  The audience got into it right away clapping to the beat.  By the time she had finished, she had managed to break the record for the ovation Regis and his shiny tie had gotten when he was introduced a few minutes ago.  A star was born.

And yes…. she got the T-shirt.

Q continues working the audience with his game of Millionaire Idol, though nothing else is able to top what the rappa girl had just done.  It seems like an eternity sitting there listening to horrible karaoke and dodging the random T-shirt shrapnel as Q slowly but surely disposed of his cotton arsenal.  But finally the stage manager appears and tells Q to take a hike.  As the comedian retreated back behind the scenes, the studio suddenly started to get very quiet.  The stage guy barked out some random directions to the crew, throws more hand signals than a third base coach, and let out with a few whistles…

And then one huge word suddenly appeared on the big screen in front of us all….

And now, my patient readers who have bore with me through the last 20 weeks of intense set-up drama, the teasing has finally come to an end.  Beginning next week, and running for the next seven Fridays, it’s going to all be about the taping that would become the episode of Who Wants To Be A Millionaire that aired on the ABC Network on Wednesday January 31, 2001.  What made it on the air, what wound up on the cutting room floor, and the reactions from this participant in this most unusual experience that you won’t even find as a feature on the DVD box set of my Millionaire Journey when it eventually gets made into a feature film.

M. Night Shyamalan is just itching to make this his next turkey.

Fridays are getting even better!  See you in seven days……

Bored former 30-something who has nothing better to do with his life than draw cartoon squirrels.
View all posts by evilsquirrel13 →
This entry was posted in Millionaire Journey and tagged 2001, abc, audience, comdeian, contestant, fresh prince, game show, introduction, michael buffer, millionaire, q, taping, wwtbam. Bookmark the permalink.