Remember when you were a kid and you played with lego blocks?  Did you ever build anything this awesome before?

It’s a red squirrel made out of Lego blocks, and I discovered it this morning on Yiharuablog, a Lego fan blog.  Wouldn’t that make a great addition to any sciurine collection out there?  Sure, he might scare your cats, but it would be worth it to have what looks like a cyborg squirrel protecting your domain!

The blog I linked to has a link to the Lego site where you can actually vote on the red squirrel Lego set to actually be produced!  Since it requires a Facebook or Twitter account, I can’t make my voice heard, but if you were ever dying to have a lifelike version of MBRS made out of blocks to put up on your mantle, well, here’s your chance! 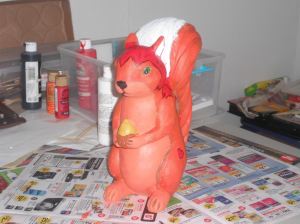 And really, who wouldn’t want MBRS around as a conversation piece?

Finally, here is a YouTube video of the Lego squirrel being made!  Why they didn’t have “Build Me Up Buttercup” playing in the background is beyond me…..

Bored former 30-something who has nothing better to do with his life than draw cartoon squirrels.
View all posts by evilsquirrel13 →
This entry was posted in Squirrel Droppings and tagged blocks, lego, mbrs, red squirrel, squirrel. Bookmark the permalink.

10 Responses to Lego My Squirrel!