The Bald and the Beautiful

I feel a draft…

Humans are hairy beasts, just like any other animal.  Yes, it is all over our bodies, but it is most noticeable at the top of our head.  Most of us are blessed with a nice head of hair.  Unfortunately, most of us men are also cursed by the fact that at some point in our adult life, that hair is going to start disappearing and growing in more important places like our nose and our ears.  By age 50, most men are going to have at least some shiny space on top of their heads.  Some men learn to embrace their baldness… I have been thinning since I was in my early 20’s, and the solar panel on top of my head doesn’t bother me one bit… 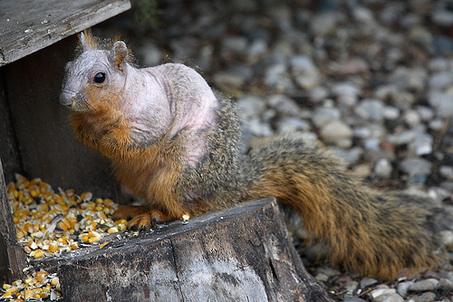 Yes, this is really a picture of me. Don’t fawn too much, ladies…

There are those men, however, who do not appreciate the fact that most of their hair is now way down in the sink drain along with that lost wedding ring and Jimmy Hoffa.  There are a couple of solutions available to these men who value their vanity.  One, of course, is the always classy and fashion forward combover…

Always better than a bowl cut!

The other option is to actually do something to restore the hair to the frozen tundra.  One of the early institutions willing to help men regain their lost fur was the Hair Club For Men.  Their ads were all over TV in the late 80’s and into the 90’s.  Here is my favorite one which I saw countless times circa 1990:

You know, Sy, you could have saved some money and looked a hell of a lot better by just getting rid of that awful do hanging over your ears in both pictures. 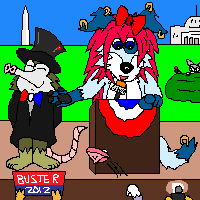 Beware of Tim Paulson on the grassy knoll.

So we start out with the Veep, Mr. Paulson, stationed in front of a typical 80’s photo backdrop some Hair Club staffer stole from an Olan Mills portrait studio, telling us about how Hair Club For Men changed his life… 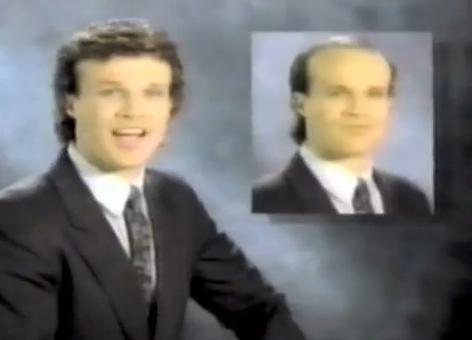 Balding gave me a mullet the natural way!

I’m sure all the Hair Club clients were told to look unhappy in their Before photos that were taken of them, but Tim’s there really takes the cake.  It’s almost like he was totally pissed off at the time he was posing for it, and the cameraman cracked some impromptu dirty joke to force a smirk on his face that he’s desperately trying to hold back.  It’s also interesting to see what Hair Club did for Tim… his After hair doesn’t really cover much more of his head than his Before hair does… it’s just fluffier.  1990 did see one last explosion of the big hair that was popular during the previous two decades. but men paying big bucks to have their hair surgically fluffed still doesn’t make any sense. 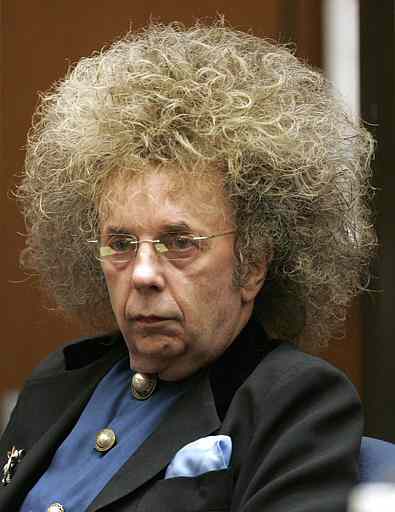 Tim was going for the Wall of Hair look.

A little later in Tim’s monologue, he utters a two word phrase that had never before and hasn’t since been uttered by another person on earth…. “objective bibliography”.  The pamphlet Hair Club will mail you should you call their toll free number has an objective bibliography, whatever the fuck that’s supposed to mean.  If you are having nightmares about all those research papers you had to write in high school right now, that’s because the only time we ever worried about damn bibliographies is when we were writing these papers for school to ensure that we were citing the sources we used at the last minute to throw the damn paper together.  I did my senior term paper on baseball salaries, and luckily remembered to cite Sports Illustrated writer Tim Kurkjian in my bibliography so that he wouldn’t find out I snubbed his footnote in a class assignment and sue the nuts off of me…

This kid submitted a term paper without an objective bibliography!

After taking up the first half minute of the ad talking about Minoxodil misconceptions and objective bibliographies, Tim then yields the stage to utter creepiness…

It’s a proven medical fact that running your hands through some guy’s hair can lower your blood pressure.

Here we see some chick who may or may not be Shawn/Sean’s significant other running her hand through his hair as Shawn just sits and smiles while the tent gets pitched.  It feels natural, like his own!  I’m guessing Shawn didn’t receive any donations from Tufts of Love then, or got that “non-surgical strand by strand method” Tim mentions as an afterthought, which probably amounts to a pubic graft. 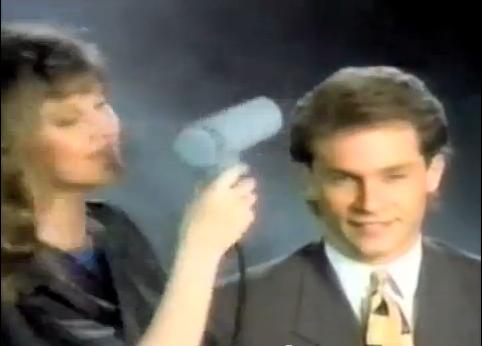 How much abuse is this guy going to stand?

Not content with just showing how cool Shawn’s hair is to paw at, this bitch next whips out a hair dryer and starts blowing those locks around!  Passing the hair dryer test has now earned the extra compliment that Shawn’s hair looks VERY natural!  Shawn never lets go of that grin the entire time he’s got that portable furnace blowing in his face, but at least now you can tell the grin is completely for the camera, and that deep down he’s about flip his wig (rim shot!) over this whole demonstration.

Shawn finally said, “Fuck this!” and got his VERY natural self out of there.

Evil creepy hair lady wanted to show how VERY BERRY natural Shawn’s hair looked when wet, but for some odd reason he was no longer available, so she had to steal Gerard here to show what a Hair Club weave looks like soaking wet.  Shawn’s loss is now Gerard’s gain… you lucky dog!  The next demonstration has her pulling the living shit out of your hair to show how VERY BERRY SCARY natural it looks!  Remember to keep smiling! 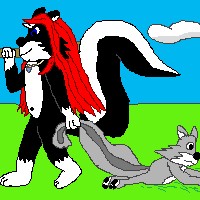 All your fur are belong to us!

Once Tim comes back on and assures us that no salesperson will ever call us (except for the telemarketers Sy will sell our information off to), we see the Hair Club For Men guarantee:

Something tells me that Shawn and Gerard invoked the guarantee, and their punishment was having creepy hair lady redo their procedures.

So if you’re losing your hair and are starting to look like your great grandfather, do what literally tens of men across the country did back in the day and call the Hair Club For Men.  Because it’s a club, it means you’re joining an exclusive group of people who enjoy having their hair fondled and ravaged by strange women who go gaga for how natural you feel.  Take it from me, Evil Squirrel, because I’m not only the Objective Bibliography Provost for the Hair Club For Men, but I’m also a client!

Bored former 30-something who has nothing better to do with his life than draw cartoon squirrels.
View all posts by evilsquirrel13 →
This entry was posted in TV Commercials and tagged advertising, after, before, bibliography, commercial, hair, hair club for men, hair loss, natural, sy sperling, tim paulson. Bookmark the permalink.

22 Responses to The Bald and the Beautiful