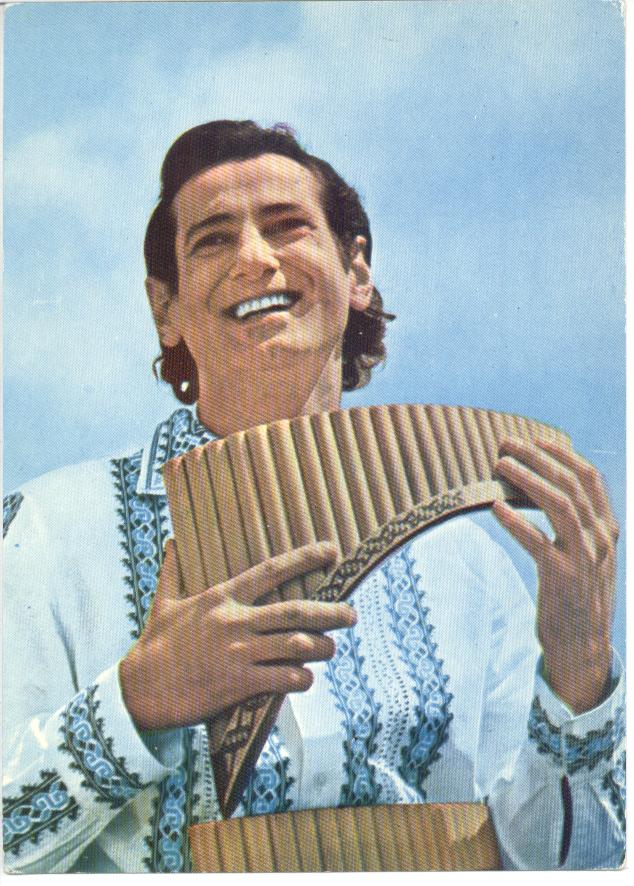 A pretty boy and his pipes, or an international recording superstar? You be the judge.

The 80’s was a golden age of compilation albums.  Record companies nobody had ever heard of were buying up cheap ad time on daytime and late night TV to hawk the greatest hits of the Fabulous 50’s, the Groovy 60’s or the Strung out 70’s.  Want to spend a quiet evening of anarchy indulging in the most romantic hits of the early punk era?  There was a compilation album for that. 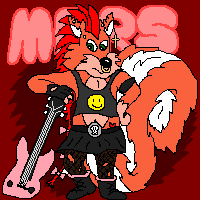 The television ad album craze even sometimes managed to sweep up the occasional weird niche artist who would go from somebody known only to their immediate family to a major pop culture icon before you could even listen to the “21 more songs” that the commercial didn’t have time to list in their scroll.  Such a man is Gheorghe Zamfir… 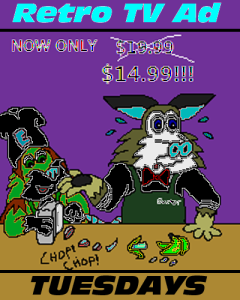 During the late 80’s and early 90’s, Zamfir was brought to our television screens and built up as one of the greatest musicians to ever walk the earth.  The commercial starts out by bragging that Zamfir has sold over 20 million records, and has had 30 gold and platinum albums!  As you listen to the melody he is playing from the elevator to Hell, you might be wondering to yourself whether Zamfir’s family bought all those records themselves  just to make him feel good about himself.  Ah, that incredible statement is prefaced by “In Europe…”, where shitty music still reigns supreme.  Over there, they’ll even buy polka records that were not made by Weird Al Yankovic. 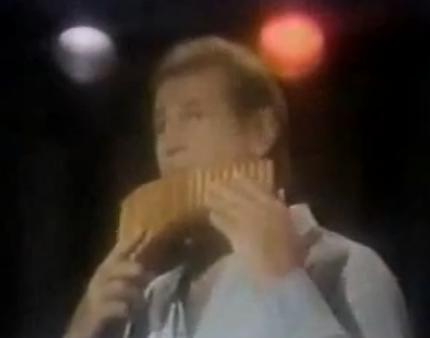 The pipes that sold a zillion albums in Europe.

Zamfir is dubbed in this ad as “The Master of The Pan Flute.”  Zamfir earned this lofty title by being the only person in the world to ever even play the fucking pan flute.  How in the world does one take up an instrument nobody has ever heard of before, anyway?  Did he try out for the junior high band and all of the instruments were already taken, so he ripped off part of the radiator and started blowing in it?  Was it the world’s worst Christmas gift from his Aunt Helga?  Regardless of how Zamfir and the pan flute were first introduced, it turned out to be a match made in pussified music heaven! 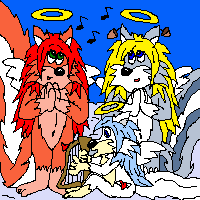 Zamfir made the angels sing! No doubt to drown out the noise from below…

Of course, the admen behind this commercial knew America wasn’t ready for a pan flautist, so they had to take the time to make the mystery instrument look even cooler than an electric guitar.  It’s proclaimed to be “a magical instrument with an enchanting sound that is unforgettable!  So hauntingly beautiful, it’s unlike anything you’ve heard before!”  You know what other magical thing has an enchanting sound that is unforgettable and unlike anything you have heard before?  An orgasm.  And nobody’s going to be having one so long as some hippie is playing the damn pan flute! 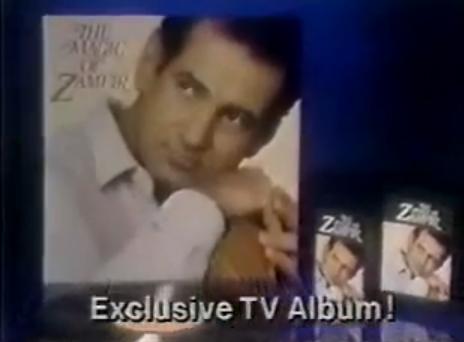 Exclusive because no record store would even put The magic of Zamfir in their bargain bin.

Listen, as The Master of The Pan Flute rips off a hauntingly unforgettable version of the theme from “Chariots of Fire”… 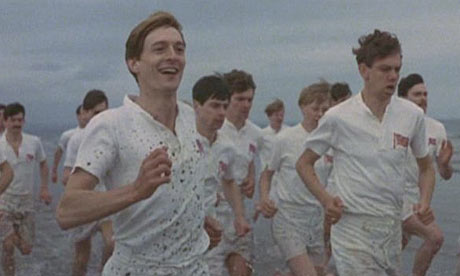 Zamfir doesn’t just tackle movie themes… no fewer than three light rock hits can be found in the scroll of hideous pan flute songs on this exclusive TV album.  Elton John’s already horrific “Your Song”, Billy Joel’s “Just The Way You Are”, and even The Beatles’ “Yesterday” are not immune from being covered by The Master of The Pan Flute.  Now I know what to give Merby for her birthday… 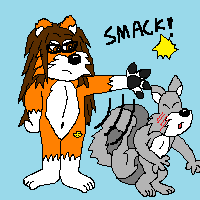 And I know what that’ll get me…

Want to enjoy listening to some killer pan flute music on the best of retro technology?  Well, you’re in luck!  The Magic of Zamfir is available on vinyl, cassette, or 8 track!  Yes, they released this album on 8 track over a decade after the last 8 track player had been thrown out with the Pet Rock! 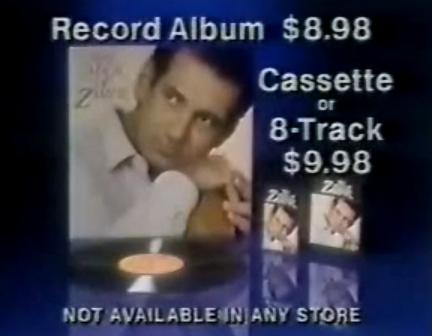 8 track player also not available in any store.

Thanks to this one ingeniously ridiculous and frequently repalyed ad, Zamfir is still known today not only as The Master of the Pan Flute, but as the personification of Shitty Music that needs to be mocked.  Americans generally don’t buy albums full of pan flute music to voluntarily play on their home stereo.  Listening to Zamfir around the house would drive your dog up the wall and force your cat to bite you.  I guess, though, it is better to be well known and ridiculed than to be a nobody all of your life. 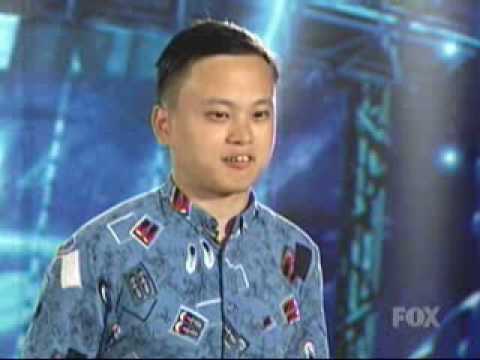 Did you know that Zamfir’s pan flute can be heard on the soundtrack to The Karate Kid?  It’s true, according to his Wiki page!  He also got his first big break in 1972 from a composer named Vladimir Cosma… who is best known by the classic Nickelodeon generation as being the man behind all of the music on cult classic cartoon “Spartakus and The Sun Beneath The Sea”!  Thank God there at least wasn’t any pan fluting going on in that cartoon…. 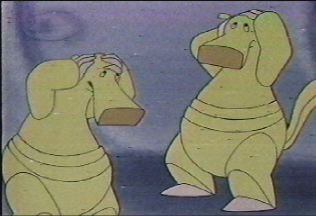 Though listening to Spartakus playing that twanging instrument was annoying enough.

They say music tames the savage breast, and nothing can possible be more savage than a big boob playing the pan flute.  The Nest would like to salute Romanian idol Zamfir and the soulless recording entity that brought him into our living rooms across the United States and seared his magically unforgettable music into our brains over 25 years ago.  You have provided us all with the inspiration to become the master of something totally obscure that has absolutely no practical musical use other than to loosen earwax.  I am dusting off my kazoo as I speak, and maybe 10 years from now with a little practice and the help of some ad saturation, I will be known throughout the world as Evil Squirrel, The King of the Kazoo! 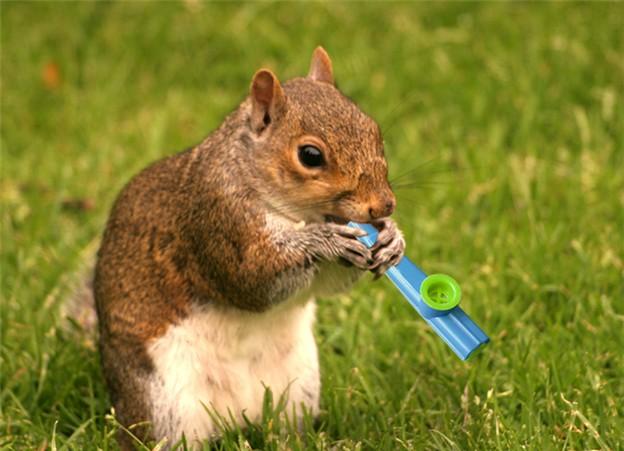 A star is born!

Bored former 30-something who has nothing better to do with his life than draw cartoon squirrels.
View all posts by evilsquirrel13 →
This entry was posted in TV Commercials and tagged advertising, album, commercial, crappy, gheorghe, kazoo, magic, music, pan flute, record, zamfir. Bookmark the permalink.

22 Responses to Panning For Gold