We’re just five days away from the most overrated spectacle humans have ever invented.  Super Bowl Sunday has practically become a secular holiday in America, bringing people of all walks of life together for unhealthy parties, pregame analysis overload, overproduced commercials, and…… um, oh yeah.  Some might even pay attention to the game on the field.

It’s dog eat dog out there, and the fans are all waiting for you to call a timeout so they can see the next Bud Light ad…

Did I mention overproduced commercials?  I’m on record numerous times on this blog complaining about the hype that goes into the Super Bowl ads each year.  I am a commercial connoisseur who can appreciate an ad that is clever, funny, and even warped.  Alas, those kind of commercials have been few and far between for a while on Super Bowl Sundays.  How can this be when advertisers now target Super Bowl Sunday for their best ads that will get people talking and be well worth the obscene amount of money it costs to buy precious Super Bowl space?

Is that Abe Vigoda? I thought he died 40 years ago!

The problem is that they try too hard.  Good ads, the ones that stand the test of time, aren’t carefully crafted and test marketed and polished and overwrought with celebrities of all status.  It’s just a good idea that is thrown out there and happens to resonate with the people when they least expect it to.  We come in to the Super Bowl expecting to see ads that will blow us away… and while that works for many people out there (See: Summer Blockbuster Movie), I want my hilarity and adorable quirkiness in a more everyman and unexpected form.  Most of the ads I feature here that I fondly remember weren’t trying to win Clio Awards or compete for the honor of being the best commercial to air during the most watched television event of the year when they were developed.  They were just made, and turned out to be memorable… 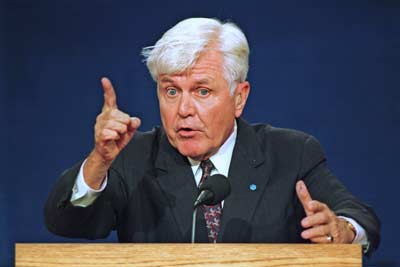 Accidental brilliance is brilliant in itself.

With all that said, I am going to honor what is by far not only my favorite Super Bowl ad of all time, but what might very well be the funniest and most cleverly written commercial in the history of words from our sponsor.  This ad was for one of the many dotcom sites that around the turn of the millennium was vying for consumer dollars that at that time were still largely being spent off the budding internet.  This commercial first aired during Super Bowl XXXIV on January 30, 2000…

I can watch this commercial a million times and still laugh every single time I see it.  It’s just so unexpected, and surreal… and the acting is spot on… played straight up serious and deadpan!

While the ad is supposed to highlight E*Trade’s low commission policy as a superior alternative for those who aren’t well off enough to afford the high fees of more established brokers, one can’t help but notice it’s also a nice satire on the state of the health care industry as well.  After all, as soon as the one doctor is informed that they have a patient with money coming out of the wazoo, he instantly skips the normal 20 hour ER wait and gets transferred to a private room.

Out of the way, lowlifes! This nurse absolutely makes this commercial!

Who clogged up the john with all of these silver dollars?

This commercial is such a classic, that I can even forgive E*Trade for the later travesty that was that #&@* #@&* @#^&* annoying baby…

So, whether you’re looking forward to the game, the ads, or just the booze… we here at The Nest would like to wish everyone a happy and prosperous Super Bowl Sunday, or whatever other sports holiday you choose to observe.  While everyone is pondering whether Peyton Manning will match his sucky brother’s championship ring collection, whether Richard Sherman will be able to keep his mouth shut, or how hilarious it will be when the Super Bowl has to be played in a blizzard… I will be thinking of more important issues, like what will the logo for Super Bowl 88 played in 2054 look like?

How did the Romans put up with this?

Bored former 30-something who has nothing better to do with his life than draw cartoon squirrels.
View all posts by evilsquirrel13 →
This entry was posted in TV Commercials and tagged advertising, baby, commercial, doctor, etrade, football, funny, healthcare, hospital, money, nurse, super bowl, wazoo. Bookmark the permalink.

23 Responses to Out The Wazoo