How To Save A Life

involved in the job, it is that of the poolboy.  These anonymous masters of the net and Clorox toil tirelessly to ensure that those privileged enough to own a pool that didn’t just come off of the shelf at Mecca will be able to safely go out for a swim without the fear that they might accidentally inhale a Baby Ruth.  If it weren’t for the world of pornography, nobody would probably even know that poolboys exist.

However, professional backyard aquatic caretaker Rick Gruber from Phoenix, AZ recently performed a heroic act of kindness that showed poolboys are capable of more than just skimming algae from the shallow end steps where Aunt Bertha sat in her whale sized one piece during the entire Memorial Day cookout.  While on the job, he noticed a poor little ground squirrel drowning in the pool he was cleaning.

Showing that pool boys have more than just one large organ, Gruber’s big heart compelled him to fish the hapless creature out of the water.  Seeing that the squirrel was lifeless, Gruber did what any other rational human being would have done in that situation… started CPR on the critter.  He began squeezing the squirrel’s sides in an attempt to clear the its lungs of the pool water.

Now we all know how artificial respiration is supposed to be given to a victim.  Did our daring poolboy provide this near death squirrel a little secondhand breath?

Alas, Mr. Gruber was afraid the squirrel might give him a disease, or even worse, bite him.  Oh come on, Rick!  MBRS will vouch for the fact that most squirrels are up on their shots, including the ones for communicable diseases that require penicillin.  And a squirrel may bite you on the lip during foreplay, but she bets you’ll like it! 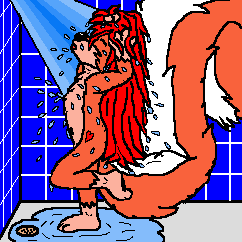 Despite the unwillingness to do a little mouth to mouth on the rodent, this story nevertheless has a happy ending.  The squirrel snapped out of its lifeless statement, hacked up a lung, and before long was off and scampering throughout the neighborhood again.  Thanks to the incredible efforts of Mr. Gruber, our featured ground squirrel did not meet his end in the deep end, and will live to do his evil work another day.  We at The Nest just hope this rescue squirrel is smart enough to pony up for some swimming lessons at the YMCA.

Sorry! Can’t join you all now, it hasn’t been an hour since I last ate some nuts.

What would you do if you came across a squirrel who was on the verge of expiring?  Would you spring into action and save its life, get out your phone and record its fail to put on YouTube, or would you go call this guy?  Rick Gruber made his choice, and for saving the life of a fellow sciurine, we would like to recognize this poolboy for going above and beyond the call of duty.  Thank you for making the world just a little safer for squirrels, sir!  But next time, don’t be afraid to channel your inner Katy Perry and show a dying squirrel some love!

And you liked it!

Bored former 30-something who has nothing better to do with his life than draw cartoon squirrels.
View all posts by evilsquirrel13 →
This entry was posted in Squirrels In The News and tagged arizona, cpr, drowning, mouth, news, phoenix, pool, poolboy, rescue, rick gruber, squirrel. Bookmark the permalink.

24 Responses to How To Save A Life