Meet Skanki Skankova, the Russian skater of ill repute.  She is not an ES character, at least not yet.  And by that I mean that this is the first time she’s appeared anywhere.  Heck, she didn’t even exist until about 12 hours ago.  However, I was inspired to draw her, and I have decided to dedicate a blog post to her today as kind of an insight into the creative process that goes on behind the scenes that yields some of the interesting characters that have appeared here who have gone on to become regulars….

There is a chatroom connected to my forum that is frequented in the evening hours by myself and some of the others… most of whom have had their personalities already cloned into ES characters.  One of the ladies (the “mother” to the Camaro Sisters) happened to come in right before the lady who you know as Beebs had a statement appear that made it sound like she was calling Ms. Camaro a scoundrel.  This set off a barage of insults, with each of us trying to outdo the others in terms of nastiness… and finally one of the girls utters the word “Skank!”  This led to Skanky Skankolla, and eventually Ms. Camaro, an appreciator of Russian women, changed the name to Skanki Skankova.  I mentioned that sounded like a great ES character, and the two went to work dreaming her up.  By this time Sprotsie had joined us, and since both her and Ms. Camaro were watching the US Figure Skating Championships live on TV, it was decided that Skanki would be a Russian Figure skater, while Beebs added all the appropriately gaudy skank paraphernalia she should be sporting….

With most of the elements dreamt up by the others, my task was to take all of these suggestions and make a character out of them.  As usual, my starting place was to pick which animal would best represent Skanki.  Now the obvious choice given the name was a skunk, which is one of my favorite species to use for female characters.  There’s just one problem though that pretty much put the kibosh on Skanki Skunk… 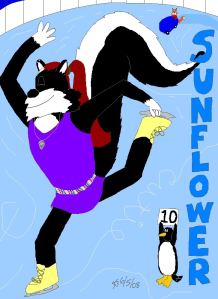 Only the cute girls get to be skunks.

Sunflower, who later became the bat-wielding character known as Hooly, was the first skunkette of the ES universe, and this was her debut drawing from the portrait series.  And as you can plainly see, the theme of her portrait is exactly the same as the basis for Skanki’s character.  There was no way I could have a pair of figure skating skunks, so I let the wheels turn some more, and finally decided to let the nationality be my guide.  Russia is known for bears, but bears make rather bland characters.  I don’t have many wolf characters, but……. a-ha!!!!

I don’t have many canines outside of the Camaro sisters, so I envisioned Skanki as a Russian wolfhound, and went to work on the picture you see above (The drawing of Skanki, of course, not the running borzoi!).  As a tribute to her figure skating background and Russia’s notorious hard winters, I chose icy blue for her fur colors.  And as a shoutout to her wild, skanky side, I went with bright blazing pink for her hair and skates.  Throw in a handful of piercings and the obligatory ES hip tattoo (Hey, what’s up with those?  That sounds like the topic of a future post!), and a new character is born… just a half a day after she was first inspired!  That’s the way it generally works in ES’s world, and whether or not Skanki ever appears in another drawing, she has already done a good service as a lesson in character creation.  I give her a perfect 10…

Bored former 30-something who has nothing better to do with his life than draw cartoon squirrels.
View all posts by evilsquirrel13 →
This entry was posted in Intros and tagged borzoi, dog, figure skater, pink, russian, skanki, skankova, skating, wolfhound. Bookmark the permalink.