Not the squirrel you were looking for, prevert?

One of my favorite little tools in the dashboard of this blog tells how people stumbled onto this blog every day, and if the vehicle happened to be a search engine, what search terms they used that led them here.  Of course, this is awesome because people search for some of the funniest, strangest, and quite frankly creepiest things… and it never fails to amuse me some of the search terms that apparently pop up my blog or an image from this blog in the results.

Keep searching if you were looking for pictures of Buster Poindexter.

At some point in the future, probably at the six month or one year anniversary of my starting Evil Squirrel’s blog, I’ll do a special post on some of my favorite search terms that have brought people to The Nest.  But for today’s entry, I’d like to focus on one that seems to turn up time and time again… one which puzzles me and makes me fear for the survival of the human race.  At some point over the past 4 months, the following search terms all led some poor soul to my doorstep:

And of course, those search results all directed someone to this page in my blog, where I brought up Sandy the squirrel from the Spongebob Squarepants cartoon in my intro post for my Sandy Squirrel character.  Since I made that blog entry not even three months ago, at least four people out there were desperately scouring the internet trying to find a nudie drawing of this.

Now, before all of you freaks out there zip your pants back up and decide to deliver me a stern lecture about minding my own business, hear me out.  I completely understand why there is a fascination out there with “cartoon porn”.  Cartoons generally shun reality, and the fantasy world they create is a natural entrance ramp for the wasteland of sexual inhibitions that live in many of our heads.  There are millions of boys out there (and maybe even some girls) who would give anything to see Wonder Woman out of uniform.  Who out there isn’t curious what Smurfette would look like with boobs?  And everyone knows that the Flintstones and the Rubbles were Bedrock’s most notorious swingers.

And the animators know these sexual fantasies within the cartoon world exist, and capitalize on it at every opportunity, creating female characters that are as gorgeous, voluptuous, and drop dead sexy as the most stunning real life model. 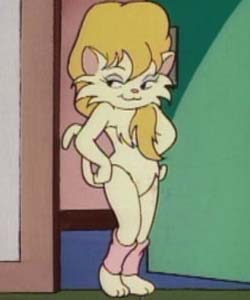 25 years old, and STILL the sexiest character in animation history.

If you grew up in the 80’s like I did, you probably caught the cartoon series “Heathcliff” at some point.  Every episode had a story centering around Heathcliff in the first half, and a story centering around Riff Raff and his gang in the second half.  Pictured above is Cleo, Riff Raff’s girlfriend, and she was the only reason worth watching the show (Unless you count the super cool rhyming fool Wordsworth).  Whoever the demented genius was behind Cleo’s creation, you can rest assured he knew full well he was creating a character designed to tug at the sexual fantasies of boys going through puberty.  The curves, the big hair hanging down over one shoulder, the leg warmers…. had tramp stamps existed in the 80’s you can rest assured she’d have some kind of feline design inked around a pierced navel.  And sure enough, if you dare go and look, you can find plenty of X-rated pictures on Google featuring Miss Cleo, as the boys who grew up drooling over her in the pre-internet days now have a new venue to show how badly they have suffered since no girls who look anything like Cleo have ever even talked to them. 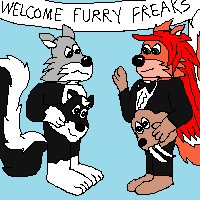 Not even at Anthrocon.

Sexuality has been a part of the art world since the days of the caveman.  What high schooler didn’t get a rise out of getting to look the wide array of nudity in classical art without having to go to the principal’s office?  But the so-called normal person might be shocked to see just how prevalent it also is in the world of anthropomorphic art.  That’s just plain twisted enough that anyone who even has such thoughts should be committed and straightjacketed, right?

I'm a fox, dammit! It's not bestiality!

Here is the website I stumbled across way back in December 2007 that set me down the road that eventually ES and friends emerged from.  It’s kind of a storage area/museum for artists of the animal persuasion to show off their works.  I find the stuff there quite fascinating, and cool, and most importantly, very creative!  If you browse around there, you’ll certainly eventually stumble upon artwork that is not intended for younger audiences (A tamer, and I’d daresay quite cute example from an artist named Sarah Wheeler can be found here).  While there is a lot of stuff there that is really just vulgar and tasteless, there is also a fair amount of R to X rated work that is very well done and as pleasing to look at as any other cute doodle.

Of course, it’s pretty hard to mention all of this and not take a good, long look at my artwork and realize I’m guided by pretty much the same principles.  Many of my characters are female.  I always strive to make them the right combination of both cute and sexy.  I obviously do not cross over into nudes or porn because of my audience both here and on the message board I created my characters on, however that doesn’t mean I haven’t been tempted to do so on the side.  I’m not ashamed to admit that either, I think it’s natural and just goes hand in hand with having the creative mind of an artist.

We’ve digressed a long way from where this blog post started, and we still haven’t answered the eternal question….

Who would really want to see THIS thing naked?

It makes me feel good to know there are those out there even more demented than I am.  I just wish they’d buy a t-shirt from me the next time they stop by for their Sandy Cheeks nudie fix…

Bored former 30-something who has nothing better to do with his life than draw cartoon squirrels.
View all posts by evilsquirrel13 →
This entry was posted in Artwork, Squirrel Droppings and tagged .cartoons, anthro, anthropomorphic, art, cleo, heathcliff, naked, nude, sandy, sexy, spongebob, squirrel. Bookmark the permalink.