I can see all of the nuts I’ve buried with my bionic sight!

While going through my most recent batch of squirrel photos on Monday, I was instantly struck by something very unusual about the pictures I took of one particular squirrel that morning.  Of the thousands of times I’ve taken a squirrel’s photograph before, I don’t ever recall seeing the details of a sciurine’s eyes show up as crystal clear as they did on this little cutie!  Generally, squirrel eyes look like almost solid dark blobs in photos… and before typing up this post, I even checked back on a number of my recent Saturday Squirrel entries to make sure I wasn’t just noticing something I hadn’t before.  Nope, this guy’s peepers stick out like no others I have seen before!

The angle of the sunlight surely played a part in making the true colors of this squirrel’s irises come out, although I think there may be something more to this bright eyed and bushy tailed critter than just some fortunate sun.  Here’s a picture of him scratching where his arm has the sun partially blocked from his face… 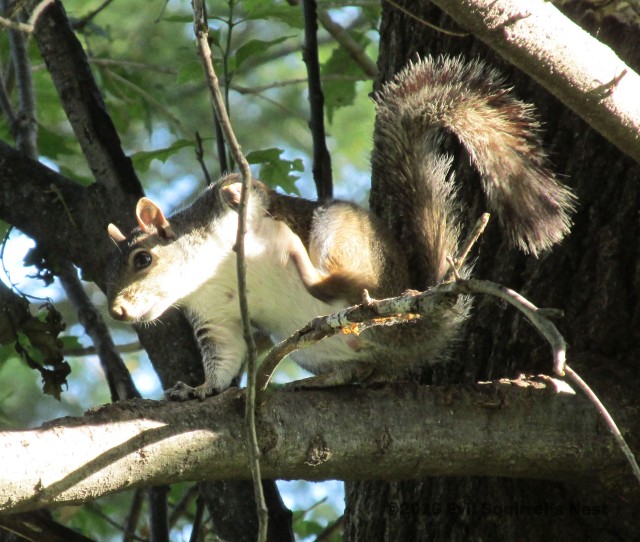 If the eyes are the window to the soul, then this squirrel must be one of the most awesome rodents ever!  This sight for sore eyes is more than worthy of being this week’s Saturday Squirrel!

Have a great weekend everyone, and a happy birthday to sciurophile-in-arms Trisha!

Bored former 30-something who has nothing better to do with his life than draw cartoon squirrels.
View all posts by evilsquirrel13 →
This entry was posted in Saturday Squirrel and tagged adorable, bright, brown, cute, eyes, photo, photography, squirrel, sun, sunlight, tree. Bookmark the permalink.