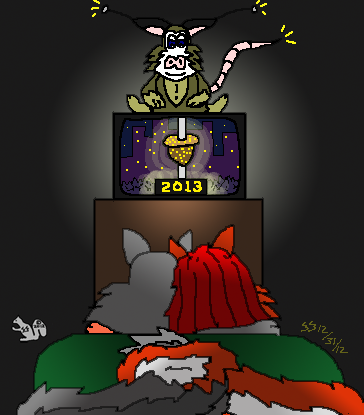 And so another year ends today… each one seemingly spinning by faster than the one before it.  It’s New Year’s Eve, the one time every year when people get together to celebrate a calendar event.

Kind of odd if you ask me, but then again, I never got the whole idea behind celebrating the new year.  New Year’s Day is a federally recognized holiday because…. it’s the first day of the year?  Huh?  Really?

That’s the most ridiculous thing I ever hoid!

And yet, New Year’s Eve is where it’s at.  The young go out and party like it’s 1999, the settled stay at home and watch the hoopla in Times square, the old and crabby hit the sack early and are fast asleep by midnight.

Me?  I’ll be at work.  I love dropping that on unsuspecting people who ask me what my New Year’s Eve plans are.  I’ll be celebrating with my good friends Fabuloso and Suavitel, and whatever few co-workers of mine who actually show up tonight.  At least I’ll be away from the stray gunfire from idiots who failed remedial physics and advanced alcohol intoxication…. not to mention the douchebags who will take to the roads stone drunk in the wee hours.  Good times!

Happy New Year! Aspirin is in the Pharmacy department across from Stationery.

Like Christmas, I enjoyed New Years Eve more as a kid.  One of my favorite traditions was listening to the year end countdowns in the radio, with the #1 song always being played right before midnight.  This was back in the 80’s, when Top 40 pop was still going strong, and a station could actually dig up 100 or more songs that were released that year that they actually played and you’d recognize.  This all went to hell in the early 90’s when radio stations began to fall into stricter formats.  Those of you born after 1985 or so will never know how good radio actually could be….

Don’t let me be a Debbie Downer, though.  Regardless of how you plan to spend this final evening of 2012, I hope it’s a great one for you.  Drink responsibly, designate a driver, and when you return from your hangover tomorrow morning, be sure to slide by The Nest… because I’ll have a super stupendous presentation that I just know you’ve all been waiting for!

Bored former 30-something who has nothing better to do with his life than draw cartoon squirrels.
View all posts by evilsquirrel13 →
This entry was posted in Squirrel Droppings and tagged 2012, 2013, celebration, countdown, december 31, new year, new years eve, party, radio, squirrel, work. Bookmark the permalink.

20 Responses to All About Eve