Do I Amuse You?

On Friday, my blogging pal Merby was inclined to post a list of certain subjects that are beyond her limits of what she will tolerate, with an emphasis on things she does not find to be funny.  Inspired by what Merbear had posted, later in the day, Goldfish put together a list of her off limits topics that she saw no humor in.

I have nothing but love, admiration, and respect for both ladies.  They have both been good friends to me here on WordPress for much of this year and I think the world of both of them, particularly after all both of them have been through in their lives.  And though most of their taboos I would have been able to guess beforehand, it’s good to know exactly where not to step when I deal with them, as I would like to keep them as my friends for a long time. 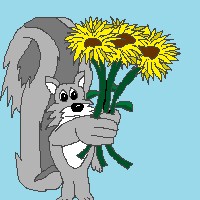 I’m sorry I used the F-word too much, Merby! Can we still be friends?

But there is an element to both of their posts that struck at the heart of something which has bothered me for quite a while.  First of all, I wouldn’t be able to come up with a list like theirs because honestly, I don’t have one.  You can crack jokes, or mock, or attempt to be funny about just about anything to me… and I may laugh, or I may not laugh.  But I will never look down on a person for their sense of humor… largely because at its core, my sense of humor is completely unfiltered.  And because of that, I view humor differently than a lot of others do.

So a squirrel, a skunk, and a possum walk into a bar…

Me and my sisters grew up watching The Three Stooges every Saturday night on TV.  While the Stooges slapstick silliness caters to the lowest common denominator of funny bones out there, the routines are comedic genius nonetheless.  Everyone I knew loved the trio, and I was quite aware of their cult popularity they maintained even many decades after their shorts were filmed.  Imagine my surprise upon growing up and finding out that there are not only some, but a LOT of people out there who not only think The Three Stooges aren’t funny, but consider them to be extremely offensive.  How in the name of Curly Q. Link could someone not be able to watch an old Stooges clip and not laugh their ass off? 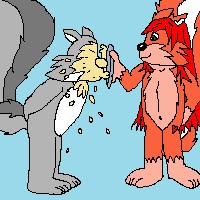 The key to this mystery is not in the humor itself, but the content of the humor.  The era of Stooges shorts most of us are familiar with ran from the 1930’s through the 1950’s.  This was a time before the civil rights movement, before the women’s liberation movement, when we still hated the Japanese and had a certain now-derogatory name for them, and a number of other old cultural norms that are no longer considered to be kosher.  We can’t fault Moe, Larry and Curly for not being visionaries, just like we have no idea what viewpoints we commonly hold today that 50 years from now will be looked back upon as barbaric and offensive.

Ug. Stupid squirrel is a caveman.

They were just trying to be funny…. 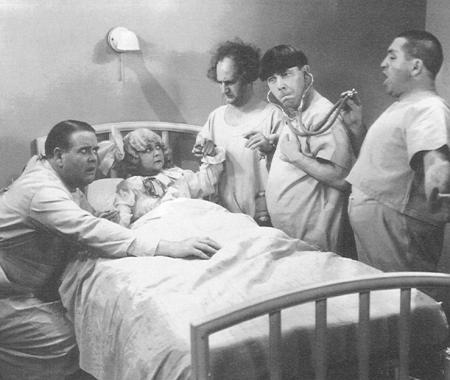 This woman is dying, and you three are cracking jokes! Where is your code of ethics!?!?

Now pardon me for a moment, because I’m going to get a bit geeky and make your head hurt…

Don’t make me get out the slide rule!

Mathematically, I would view humor as an equation like this:

Where a, b, c and so on are the different physical elements of the joke… i.e. the content.  f generally stands for function in math, and there are many comedic functions one an use to produce humor…. exaggeration, stating the obvious, mockery, transposition or transference, puns and other word games, etc.  The result is H, humor.

Now to find F, or the value of the “funniness” of a bit of humor, you use the same equation, but have to add in a person’s tolerance value.

While humor is independent of a person’s personal tastes, the funny value (F) most definitely is not.  U(a+b+c..) is the value of a person’s understanding of the content of the joke.  It’s a multiplier, since the more a person knows about the joke’s content, the stronger their F reaction is going to be to it.   T is for tolerance, and the T factor is three-pronged in this equation… there’s a T value for what a person thinks about the content, the comedic function being employed, and how both of those go together all affect the F value.  If any of the three T values is largely negative, the F value is also likely to be very negative.

Only one character here has a positive F value.

So while people can find something funny or not funny depending upon their own likes and views, humor is humor… and just because someone or even a large number of people come up with negative F values in their equation does not make something that was meant to be humorous as anything but humor.  You have a right to say something isn’t funny, but you have no right to say something is not humor. 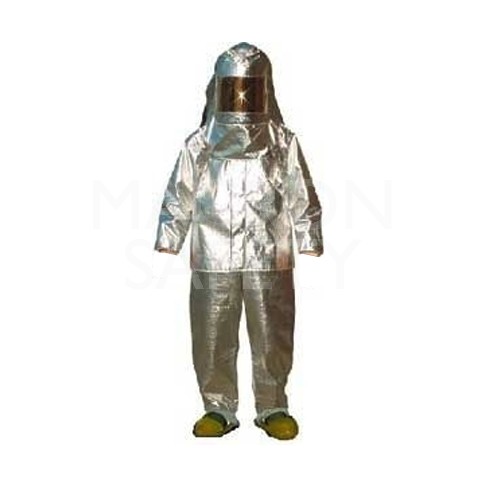 First of all, it pisses me off when someone makes a humorous comment regarding X, and after everyone is done gasping and loosening up the instant wedgie they just got, they say that that person must be an X-ist.  Just last week I was mocking pet owners and the way they feel about sleeping with their animals.  Holy shit, that no-good lousy Evil Squirrel must hate pets and the people who own them!  Let’s boycott his blog!!! 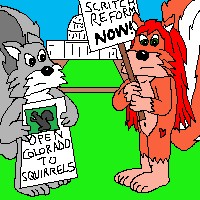 Just pretend their signs say they are boycotting my blog and that I’m a total dick.

Of course, I think nothing of the kind.  Humans are eminently mockable creatures.  Our distinctive individual personalities give us quirks that are just ripe for being poked fun at, whether we appreciate it or not.  The same is true of of the overall personalities of groups of people, and since the human brain can not store individual data for 7 billion people, we have a strong natural tendency to categorize the people of the world into groups, whether we admit to doing so or not.  People can fall into different groups based on their personalities, attitudes, occupation, hobbies, relationship status, child status, politics, religious views, gender, sexual preference, race and ethnicity….

These overall group personalities are what we commonly refer to as stereotypes.

What is a stereotype anyway?  According to Google, a stereotype is a widely held but fixed and oversimplified image or idea of a particular type of person or thing.  Essentially, a stereotype is one of a collection of traits that is usually associated with being common to the entire group.  Of course, we know on the individual level this is garbage.  Not all lawyers are evil leeches, not all hillbillies are inbred, not all Californians know how to surf, not all Trekkies are virgins…

Note I just ran off a list of four stereotypes that most people not only wouldn’t find to be offensive, but would probably laugh at if I made an appropriate humorous comment about them.  A stereotype is no different if it is attached to an innocuous group or one we consider to be persecuted.  And no matter what the trait, or what class of people it comes to represent, a stereotype is just that, a stereotype, and not something that should ever be used to pigeonhole an individual member of the group.  In general, stereotypes can come from outdated beliefs or circumstances, inferences we make from certain traits and personalities, or from overall observation.  And anytime observation is involved, it’s the type A personalities of the group who are going to carve out the outside perception of the entire group.

We are in-your-face angsty, so all goths must be angsty as well!

A good example of a group where the noticeable members set the stereotypes for the whole group, and one who up until recently didn’t fall under the umbrella of political correctness…. well, I’ll let my friends Blaine and Antoine demonstrate for you….

The effeminate man has long been one of the most mocked stereotypes in the world of comedy.  Why is that?  Is it because most comedians are ignorant homophobics who are trying to cram their disgusting views down our throats with their pathetic attempts at humor?  I highly doubt that either Damon Wayans or David Alan Grier, the comedians in the popular “In Living Color” skit Men on Film, were homophobes or undercover agents for the Westboro Baptist Church.  They were just trying to make people laugh by poking fun at what was, and still is, a very mockable stereotype.  And if it wasn’t, you’d never see it in comedy. 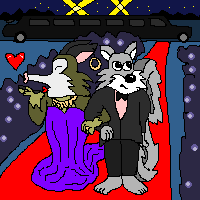 I didn’t find this funny in the least….

It doesn’t mean everyone has to laugh at it.  There’s probably a lot of people who didn’t find that skit or that show to be funny at all.  But I got a Rainbow Donkey keychain that says there were probably a lot of gay men who were laughing along with the rest of us when that skit aired in 1991.  But the most important point I want to make here is that what one chooses to find humorous does not define what they are…. and there’s a big difference between dressing up in drag and sporting a falsetto in an obvious attempt to entertain, and making up a sign to stick in people’s faces that reads “God Hates Fags”.

Humor, regardless of what you make of the subject matter, does NOT, and NEVER DOES equal hate.  Hate is pretty clear and apparent when you see it, and most people find hate to be disgusting.  I am one of those people. 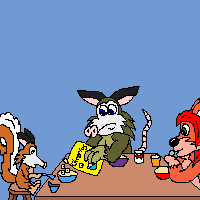 Let’s all live together in one big inter-species world!

But don’t judge me for my sense of humor.  I say a lot of things on this blog, and in real life, in the name of humor that you may not find to be funny.  But I do not indulge in hatred… and it’s time people recognized the difference.

Bored former 30-something who has nothing better to do with his life than draw cartoon squirrels.
View all posts by evilsquirrel13 →
This entry was posted in Squirrel Droppings and tagged comedy, groups, hate, humor, misunderstanding, offensive, personality, squirrel, stereotypes, traits. Bookmark the permalink.

23 Responses to Do I Amuse You?