FUZZYWIG: Shut yer crack, kid.  Watch and learn from the expert….. excuse me, sir!  Would you be interested in a chance to strike it rich with a little three card monte?

SLIDER: Hmmmmm…. I’m not sure.  How do I know this isn’t some kind of ripoff?

FUZZYWIG: Are you insinuating my game might not quite be on the level!?!?  Sir…. just look at this face….

FUZZYWIG: ….do I look like I’d pull something shady on you?

SLIDER: (Looks over the cunning coon carefully…) Eh, I guess you’re right.  You seem like a pretty honest critter.  OK, how much does it cost to play?

FUZZYWIG: Three coins…. and none of that funny money with Chuck E. Cheese on it!

SLIDER: (Digs into his pocket and produces three coins) Alrighty then, you’re on!

Fuzzywig studies the coins carefully and even tries biting into one…

FUZZYWIG: Good!  Let’s get on with the action!  I’m going to place my assistant Bashful here in one of these cups.  Keep yer eye on him while I do a little rearranging of the cups, and if you correctly guess where he is once I’ve finished, you’ll get 10 times your original bet back!  A whole twenty coins!

BASHFUL: Bye bye, sir!  See you in a couple minutes!

Fuzzywig covers Bashful with the cup, then turns towards Slider…

FUZZYWIG: Nice rock… (points to his head) but a few pebbles short of a boulder, if you know what I mean.  OK, here we go!  I’m gonna shuffle these cups around…. do a little hocus pocus with my quick paws!

FUZZYWIG: (Shuffling the cups like a practiced street magician) Keep yer eye on that cup Bashful’s in!  Don’t ever lose sight of him!  You still know where he’s at?  Keep watching….. keep…. OH WOW!!!  Is that a naked unicorn!?!?  Hey baby!!!!

SLIDER: (Turns to look where Fuzzywig’s had been staring) Where!?!?

FUZZYWIG: (Continuing to shuffle the cups) Eh, I musta been mistaken.  You been keeping yer eye on Bashful’s cup?

FUZZYWIG: OK, I think we’ve mixed up these cups enough!

FUZZYWIG: So, sir, which cup is our little rock under?

SLIDER: I lost track!  You distracted me and….

FUZZYWIG: Well, look at the bright side…. you still have a one in three chance of winning ten times yer loot back!  Pick a cup!  Any cup!

FUZZYWIG: We don’t have all day, sir.  There’s a line behind you waiting to cash in on this once in a lifetime moneymaking opportunity!

Suddenly, a voice comes from under one of the cups….

SLIDER: Nope!  That’s the cup I want!  Right there!  And you better hold up your end of the bet!

Fuzzywig lifts up the rightmost cup 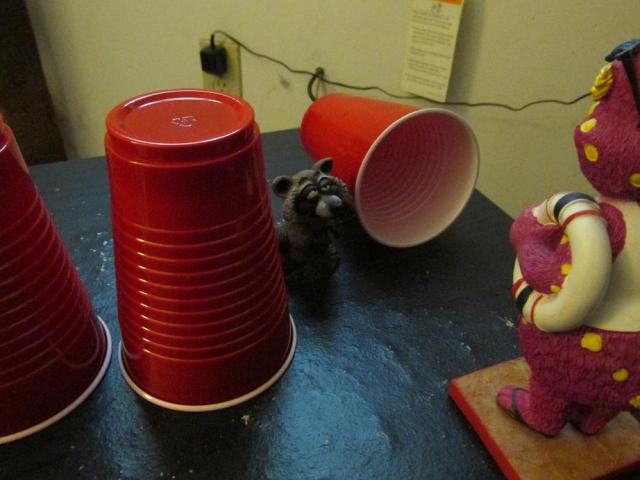 FUZZYWIG: I think you meant to choose this cup over here….

Fuzzywig lifts up the leftmost cup to reveal….

FUZZYWIG: Well, how about it sir?  Would you like to press your luck agai…..

SLIDER: You and your cheating little rock can go straight to hell!!!  I’m reporting you to the Better Business Bureau!  (Slider stomps off in a huff, three coins lighter) 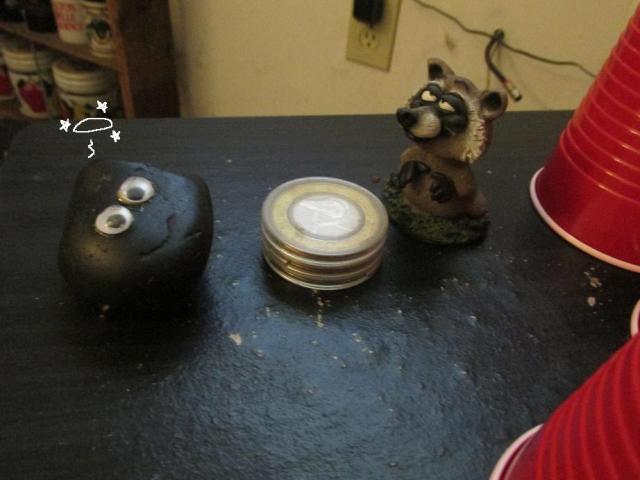 BASHFUL: Who knew those ventriloquism skills I picked up at the School of Hard Rocks would actually pay off someday?

FUZZYWIG: You were excellent, my dear Bashful!

BASHFUL: But I really am getting a little dizzy getting shifted around like that so often!

FUZZYWIG: Don’t wimp out on me now, Blackstone!  This partnership has been too lucrative!

BASHFUL: Speaking of…. can I have my share of the profits now?

FUZZYWIG: Errrrr….. maybe a little later…. (Mutters to himself) like after you’ve been shipped back out of here, sucker!

Bashful is on loan to The Nest from Bacon and friends at Pig Love.  Look for more of his comic misadventures to come presented in a way only The Nest can tell them!

21 Responses to Pros At Cons