UNCLE SAM: My fellow Amurricans, it’s that time of year where we celebrate our freedom and independence the only way that’s appropriate on the greatest shelf in the world….. by blowing shit up!!!!  Troll!  Let’s get this show started!

RAINY: I do NOT approve of my precious rain gauge being used to launch bottle rockets!

TROLL: Quiet down!  Do you wanna get deported?  Alright (lights the first firecracker of the night) here we go!

SAM: What’s the meaning of invading our airspace?

BRIGHTBIRD: You just shot me down while I was flying north for the summer, you jackass!  Look what you did to my head!

SAM: That looks like a brain tumor to me.  You weren’t going to make it much longer anyway, so consider this free compassionate euthanasia.  (Clap clap!) Cleanup!

BRIGHTBIRD: You can’t do this to me!  I want to speak with my attorney!  Or Ralph Nader!  Or at least my agent….

Brightbird continues squawking until he’s deposited into the city dump.

SAM: Stop your yammering and light that next firework, peasant!  You wanna disappoint the children? 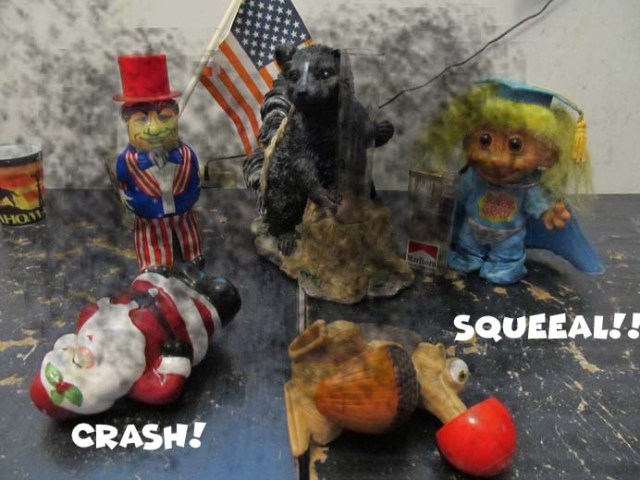 TROLL: Oh shit!  There goes that pony I was hoping I’d get for Christmas!

SAM: Isn’t this a little out of season, Claus?

SANTA: Dammit!  I was just taking the sleigh down to Costa Rica for a two week vacay on the beach!  You’re lucky I wasn’t wearing my jingle bell elfkini!

SAM: Good to know I’m not the only one who uses taxpayer funded transportation for personal use.  As for Christmas in July…… (clap clap!)

SANTA: You’re lucky you were already on the naughty list, Sam!

SAM: Alright, enough gawking at the carnage!  Fire that next shell!

FUZZYWIG: (Inhales) Ah, now this is how I celebrate my freedom to get high!

FUZZYWIG: Dude, I get two puffs before I have to pass.  You’ll get your turn…

SAM: This is an outrage!  Dope smoking at my beloved fireworks show!

FUZZYWIG: Fireworks show?  Is that what all those pretty colors were?  I thought I was already completely lit, but maybe I need a few more hits….

SAM: I’m not going to allow some pothead to sabotage this patriotic celebration!  Troll, give me that next firecracker! 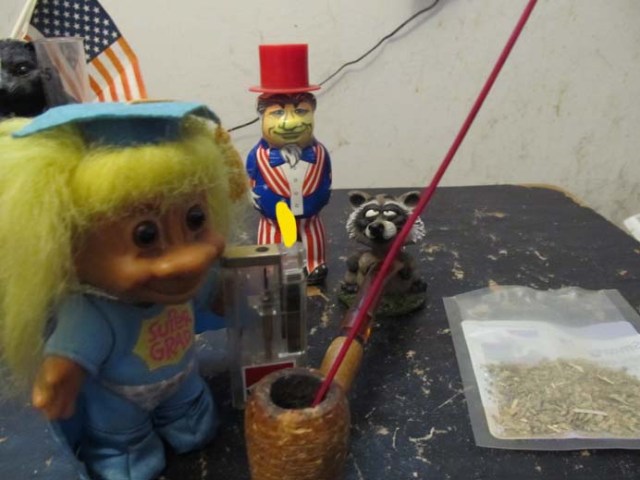 FUZZYWIG: No, wait!  You can’t use my bong to shoot off fireworks!

SAM: We’ll see about that!

SAM: Another victory for our fine shelf!

LUNA: Dammit, I’m a Princess, and I’m going to see to it you hooligans all end up beheaded for this travesty!

SAM: Please!  We won our independence from the monarchy a long time ago!

RAINY: Is that why you’re the autonomous king now?

SAM: That’s neither here nor there… (Clap! Clap!) 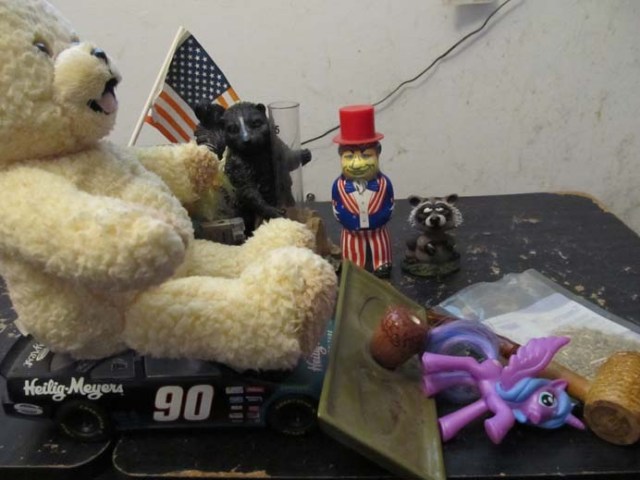 SNUGGLE: It’s a good thing I get paid by the job and not the hour!

SAM: Now this place will smell more like a fireworks show than a Grateful Dead concert!  Now carry on with the explosions!

SAM: This is a celebration of our freedom, not an Ozzy Osbourne show, lady!  Where’s your star spangled halter top?

SAGE: Sir, I’m here on behalf of pet owners everywhere whose poor furbabies are being traumatized by the loud noise all these fireworks make every July….

SAM: You think I care about some flea bitten pooches when I’m exercising my Dog-given right to create a war zone?

SAGE: See, sir.  Couldn’t you show a little compassion towards those who don’t understand what’s….

SAM: Compassion?  I’ll show you and your mutt some compassion, you communist!

SAGE: (Dives on top of Fleabag) Oh no!  Don’t worry, puppy, I’ll cover up your ears!

FUZZYWIG: Falling pink cows…. yep, that has to be the LSD I tried in the cub scouts.

SAGE: Help!  I’m being crushed by a moo cow!  And I’m a vegetarian! 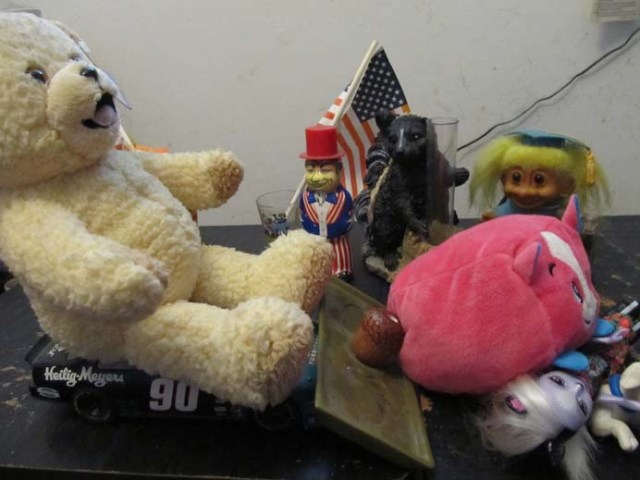 SNUGGLE: Finally!  An actual cow caught up in my cowcatcher!

CHILD 4: Thanks for taking us to see the fireworks, Mommy!

LITTLEST: Even if we were grounded for life.

SQUIRREL MOM: Anything for my precious boys.  Why don’t you kids move up a little closer?

CHILD 1: You mean go across this line?

CHILD 2: The one that says “Danger! Do not cross?”

SQUIRREL MOM: Sure.  Don’t worry, I won’t tell anyone.

CHILD 3: Awesome!  The view is so much neater from this close!

CHILD 4: We’re breaking the rules and not getting in trouble! 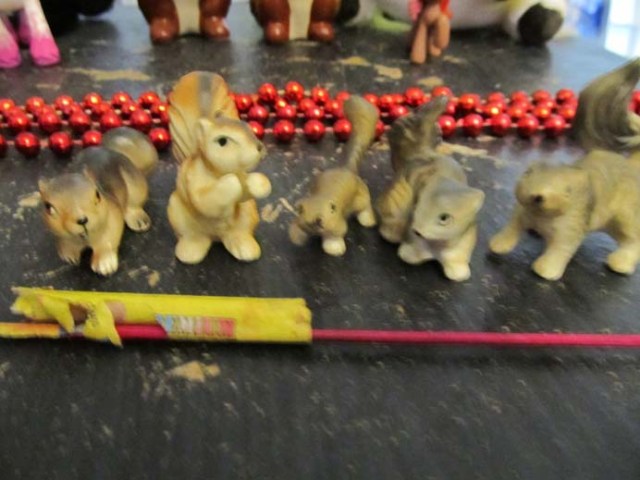 SQUIRREL DAD: Dear, wasn’t that our children who just got blown to pieces?

SQUIRREL DAD: Oh dear.  I guess we’ll have to make some more?

SQUIRREL MOM: Keep that Roman candle in your pants, dear, unless you want it put in the blender again…

BROTHER BEAR: Pardon me for intruding, but I was just laying on this cloud, unable to move due to my manufacturing defect, when….

TROLL: Nobody cares about your sob stories! (Clap, clap!) 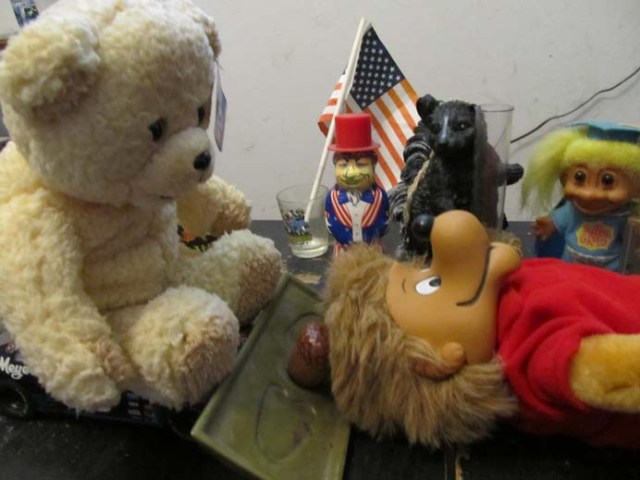 Snuggle’s bulldozer spins its wheels in the studio floor…. I mean, dirt.

SNUGGLE: I’ve got the pedal on the floor!  This fatass is too heavy!

SNUGGLE: Hey, there we go!  Way to fight blubber with blubber!

SAM: Bullshit, son!  Fireworks were invented in the good ol’ U. S. of A. by Ben Franklin and Sam Adams!

SAM: Now that you see things my way, let me show you some good ol’ Amurrican firepower!  Troll!  Load up the heavy artillery!

RAINY: If this blows up my rain gauge, I’ll spray the entire continent!!! 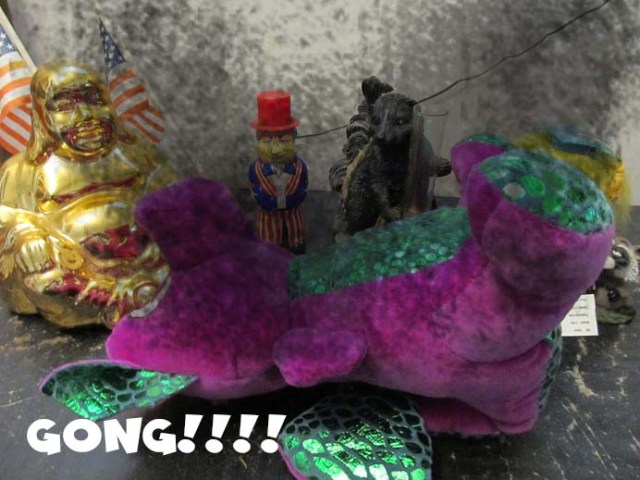 RAINY: A dragon was flying overhead?

PASS: I was just using the jet stream to fly to China for my nephew’s hatching….

Sam gets ready to clap….

HUNG LO: No, Hung Lo take this one to China….. Chinese buffet! 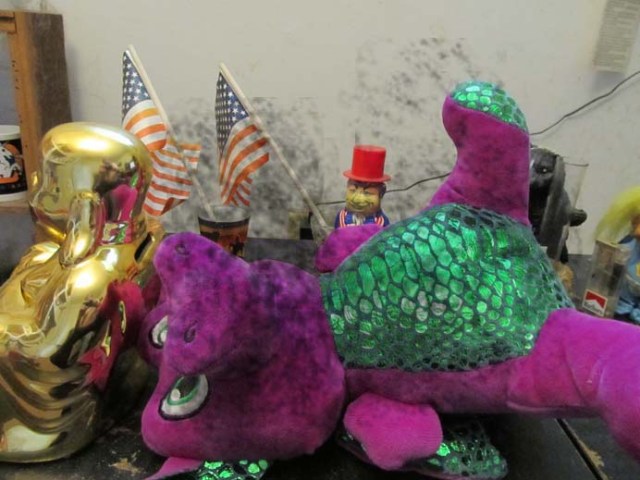 PASS: (being dragged away) Oh goody, all that flying made me work up quite an appetite….

SAM: It’s getting late!  Let’s get another payload off before the damn sun comes up! 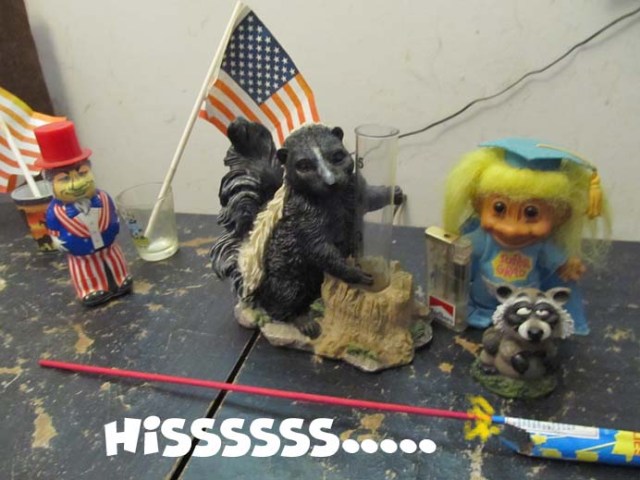 TROLL: Where did that come from? 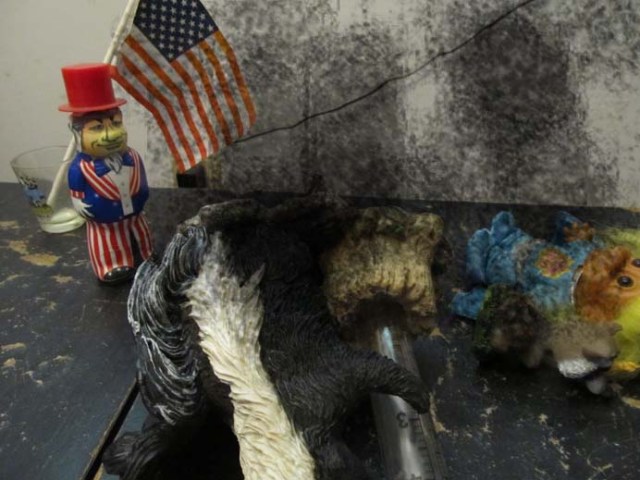 SAM: Come on, it was just a little bottle rocket!  Shake it off and get back to work….. dammit!  Who’s ruining my fireworks shows by shooting off fireworks!?!?

DOUG: Pardon me, did you happen to see a stray firework pass by here?

SAM: Who do you think you are shooting off dangerous firecrackers!?!?  Don’t you know that’s illegal in all 50 states?

DOUG: No, but I’m from Canada.  We were celebrating Canada Day today!

DOUG: Nah, Bub’s my twin brother.  We were born on different sides of the border, eh?  Anyway, he blew his weewee off playing with fireworks as a child.

SAM: Well, look what you did to my assistants with your foreign show of heresy!!!  What do you have to say for yourself, Canuck?

SAM: Alright, enough of this nonsense!  It’s time for the GRAND FINALE!!!! 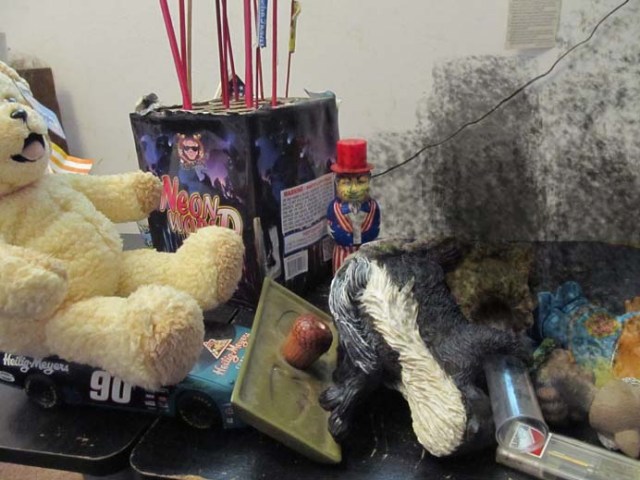 SAM: (Saluting) Way to die as heroes for your shelf, men!  I’d have a monument erected in your honor, but all these fireworks bankrupted the treasury.  Now I just need to find a brave volunteer to light up the finale…..

BUSTER: So I just light this wick, and…..

SAM: Yes, and all ten thousand fireworks will go off at the same time!  It’ll be a BLAST!

SAM: I’m just going to retreat to my bunker now and watch this glorious display of independence from the window…. 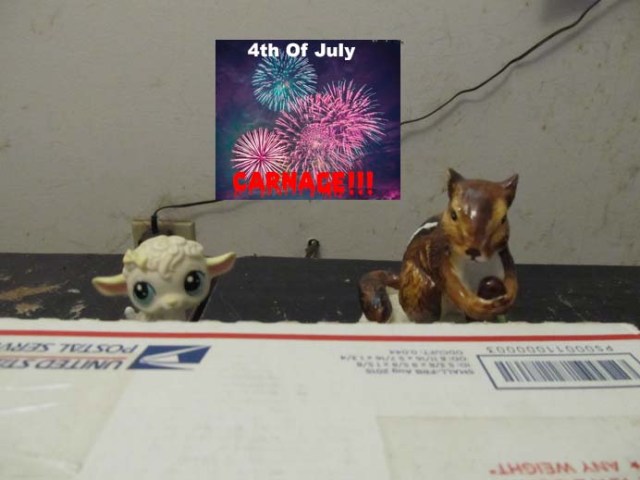 CHIP: Last night’s Independence Day fireworks display on the Shelf turned tragic as exploding fireworks killed 69 critters and maimed or injured several million more.  Shelf President Uncle Sam downplayed the incident at a press conference from his secret bunker proclaiming the casualties to be acceptable losses, while praising the event’s safety by citing that the death toll had dropped 420% from the previous year’s show.

MARY: As always, our newscast is sponsored by Hung Lo’s Chinese Buffet, home of the Almost All You Can Eat Dragon Ball special for $9.99.  Get it while it’s fresh!  Open on the Fourth of July!

CHIP: Thank you for that completely irrelevant announcement, Mary.  Remember kids, don’t play with fireworks, or you may end up on the news….

MARY: Quite literally on the news!

Bored former 30-something who has nothing better to do with his life than draw cartoon squirrels.
View all posts by evilsquirrel13 →
This entry was posted in Shelf Critter Theatre and tagged critter, death, fireworks, funny, fuzzywig, humor, hung lo, independence day, july 4, rainy, shelf, snuggle, theatre, troll, uncle sam. Bookmark the permalink.